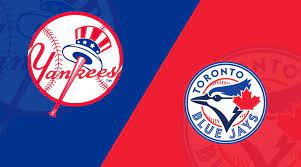 The 2022 MLB season goes on Wednesday, May 4, with the marquee AL East matchup at Rogers Centre in Toronto, Ontario, so we bring you the best Yankees vs. Blue Jays betting pick along with the latest odds update on BetDSI Sportsbook.

New York outlasted Toronto 3-2 as a -120 road favorite in Monday’s opener. The Yanks were listed as +118 moneyline dogs for the middle contest which has been excluded from this preview. Back in April, the Yankees and Blue Jays split a four-game set in New York.

The Yankees beat the Jays for their tenth straight W

The New York Yankees improved to 17-6 on the season following that narrow victory at Rogers Centre on Monday night. It was their tenth win in a row, as the Yanks increased their lead in the AL East, retaining the best record in the majors.

Gleyber Torres had a good day in the office last Monday, going 2-for-4 with three RBIs. His single in the top of the ninth inning drove the winning run home. Jordan Montgomery tossed five frames of a two-run ball, while four relievers shut down the Blue Jays’ offense.

Nestor Cortes will take the mound Wednesday in Canada, searching for his second consecutive win. The 27-year-old lefty is 1-0 with a shiny 1.31 ERA, 1.43 FIP, and 0.87 WHIP in four starts and 20.2 innings of work in 2022. Cortes met the Blue Jays on April 12 and tossed 4.1 scoreless innings in a 4-0 victory at Yankee Stadium, surrendering only three hits in the process.

The Toronto Blue Jays fell to 15-9 on the season following Monday’s defeat to the Yankees. It was their fourth loss in the previous nine outings, and the Jays missed an opportunity to extend their winning streak to three games.

Toronto scored a couple of runs in the bottom of the fourth. The Jays recorded three hits and drew two walks off the Yanks’ relievers but couldn’t find a way to put another run on the scoreboard. Ross Stripling threw four frames of a two-run ball, while Yimi Garcia was charged for a loss.

Yusei Kikuchi will toe the rubber Wednesday, and the 30-year-old left-hander hasn’t impressed in his first season with Toronto at all. Kikuchi is 0-1 with a 5.52 ERA, 6.63 FIP, and 1.91 WHIP in four starts in 2022. He’s allowed a whopping 12 runs (nine earned) and 13 free passes across 14.2 innings of work. Kikuchi was charged for a loss in that 4-0 defeat at Yankee Stadium in April. Yusei yielded three runs (two earned) through 3.1 frames.

Yusei Kikuchi has struggled through his first four starts of the season, and things won’t get any easier, as New York’s offense is one of the hottest in the majors. Last Friday, Kikuchi surrendered four earned runs on four hits and three walks in a tough home matchup with the Astros. He recorded just eight outs before the Blue Jays’ bullpen took ever.

I’m a big fan of Nestor Cortes. The crafty southpaw has done a superb job for the Yankees and my fantasy team so far this season, but the second meeting with the mighty Blue Jays lineup might be a tricky one.

I’m expecting the Yankees to hit hard and well against Yusei Kikuchi, and I wouldn’t be surprised if Cortes enjoys his first bad outing in 2022. The Blue Jays’ lineup is one of the most dangerous in baseball, so I’m backing the over on the totals.