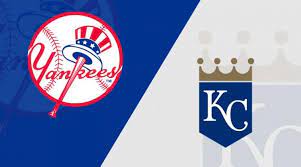 The New York Yankees head to Kauffman Stadium in Kansas City to open a three-game series Monday, August 9, so here’s the best Yankees vs. Royals betting pick along with the latest odds update on MyBookie Sportsbook.

Back in June, the Yanks beat the Royals in a three-game set at Yankee Stadium, 2-1, and New York has dominated Kansas City over the last few years, winning 12 of their previous 16 encounters. The Yankees are -170 favorites for Monday’s opener at Kauffman Stadium, while the Royals are +157 home underdogs with a total of 9.5 runs.

The Yankees continue their playoff push

The New York Yankees have been terrific since the All-Star break, winning 15 of their 21 games in that span. The Yanks were searching for their sixth straight victory on Sunday afternoon, looking to sweep a four-game home set against the Seattle Mariners (the clash was tied at 0-0 in the bottom of the sixth).

Jameson Taillon will get the starting call Monday, and the 29-year-old righty has been excellent over his last six starts, posting a microscopic 1.45 ERA through 37.1 innings of work in the process. Interestingly, Taillon hasn’t been charged for a loss since May 31. He’s 7-4 with a 4.04 ERA and 1.21 WHIP in 21 starts this season.

Excluding their Sunday’s clash at St. Louis, the Kansas City Royals have lost six of their previous eight games. On the other hand, they’ve won six of their last seven outings at Kauffman Stadium and are 28-25 at home in 2021.

The Royals fell to 47-62 on the season following a 5-2 defeat at the Cardinals this past Saturday. Their season is already ruined, as the Royals trail 15 games behind the bottom wild card in the American League.

Carlos Hernandez will toe the rubber Monday, and he’s 3-1 with a 4.58 ERA and 1.42 WHIP in four starts and 12 relief appearances this season. The 24-year-old right-hander has joined the Royals’ rotation recently, posting a 4.08 ERA and an 18/9 KK/B ratio across 17.2 innings of work in his four starts.

Hernandez met the Yankees once in June and blew a save, while the Royals suffered a 6-5 defeat. He allowed two earned runs on one hit and three walks through a couple of frames.

The Yankees desperately need another strong performance from Jameson Taillon, but they also have to provide solid run support which seems likely against Carlos Hernandez and the Royals bullpen that has recorded a 3.95 ERA over the last two weeks.

The Yanks miss Anthony Rizzo (COVID-19), but I don’t trust their offense anyway. New York’s pitching staff should be a decisive factor in this matchup, as the Royals have recorded a horrible .209/.258/.371 triple-slash over their last 14 games while scoring just 45 runs in the process.

New York is without Aroldis Chapman (elbow), but the Yankees ‘pen looks good, registering a 3.33 ERA and 3.20 FIP in the last couple of weeks. Also, the Yanks’ relievers are 6-1 in that stretch.

The over has hit in nine of the last 12 meetings between the Yankees and Royals at Kauffman Stadium, but I’m not expecting a high-scoring affair this time around. Considering their current form, New York and Kansas City should not combine for more than nine runs.