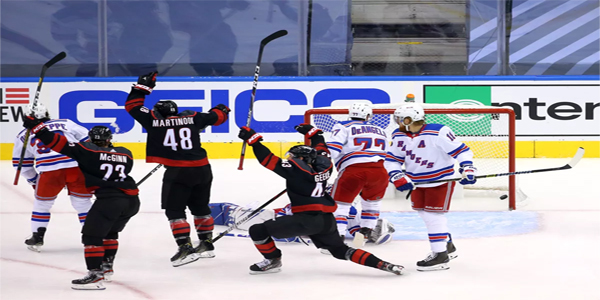 The 2022 Stanley Cup goes on Saturday, May 7, with the Eastern Conference Conference First Round showdown at PPG Paints Arena in Pittsburgh, so we have prepared the best Rangers vs. Penguins betting pick and odds.

The Penguins welcome the Rangers for Game 3 after they split the first two games of the series at Madison Square Garden in New York. According to Bookmaker Sportsbook, the Rangers are -125 moneyline favorites for Saturday night’s contest, while the Pens are +105 home underdogs with a total of 6.0 goals.

The Rangers bounced back in Game 2, Shesterkin had another big night

The New York Rangers suffered a tough 4-3 triple-overtime loss in the opening clash of this series. They responded with a 5-2 victory last Thursday, scoring a couple of unanswered goals in the third period. Artemi Panarin and Frank Vatrano accounted for one goal and two assists each, while Igor Shesterkin posted 39 saves.

Shesterkin was terrific in the regular season, posting a 36-13-4 record with a 2.07 GAA and .935 save percentage. The 26-year-old goalie turned 79 shots aside in Game 1, and Shesterkin should get another starting call Saturday in Game 3.

The Rangers relied on their defense in 2021-22. They were yielding only 2.49 goals per contest (2nd in the NHL) while posting the seventh-best penalty-killing percentage (82.3%). On the other side of the ice, the Rangers were scoring 3.05 goals per game (tied-16th). Their power-play percentage of 25.2 was the fourth-best in the league.

The Penguins have to lean on their third-string goalie

The Pittsburgh Penguins lost Casey DeSmith in that epic victory in the opening game of the Rangers series. The 30-year-old goaltender suffered a lower-body injury that kept him off the ice in Game 2, and DeSmith is reportedly done for the playoffs.

Casey DeSmith was the Pens’ second choice this past regular season. He went 11-6-5 with a 2.79 GAA and .914 save percentage. Tristan Jarry (34-18-6; 2.42 GAA) has been sidelined with a lower-body injury since April 14, so Louis Domingue will patrol the crease Saturday at home.

Domingue had 17 saves in relief in Game 1. The 30-year-old netminder yielded five goals on 40 shots last Thursday, and the Pens’ fans hope for better performance in the remainder of the postseason. Jake Guentzel has scored three goals over the previous two contests, while Sidney Crosby and Bryan Rust have accounted for three assists each.

The Penguins are a top-notch defensive team, but they will have a tall task to overcome Tristan Jarry’s and Casey DeSmith’s absence. On the other side, the Rangers can count on one of the best goaltenders in hockey, and I’m expecting Igor Shesterkin to make the difference.

Both teams possess plenty of dangerous offensive weapons. The Penguins were tallying 3.28 goals per game during the regular season, but with the third-string goalie in the crease, I doubt their chances to outscore the Rangers.

I wasn’t expecting to see seven goals in Game 2, but it just showed how dangerous these two teams are on the offensive end. Hereof, I lean the over in Game 3, but this time around, the line has been set at exactly six goals.

Four of the Rangers’ last five contests and four of the Penguins’ previous six have gone over the total. The over is 5-3-2 in the last ten meetings between New York and Pittsburgh.