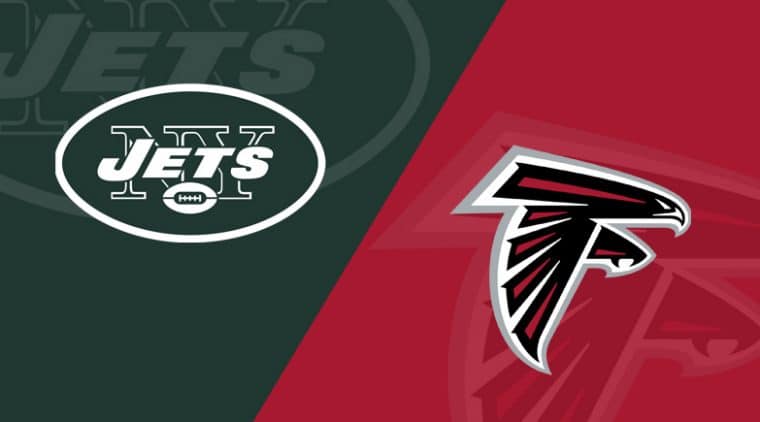 Week 5 of the 2021 NFL season continues Sunday, October 10, when the New York Jets line up against the Atlanta Falcons at Tottenham Hotspur Stadium in London, UK. The NFL is back in Europa, so here’s the best Jets vs. Falcons betting pick along with the latest odds update on BetDSI Sportsbook.

The Falcons opened as 3-point favorites to win this clash at the neutral site. The Jets are +145 moneyline dogs, while the totals are set at 46.0 points. These two non-conference foes meet for the first time since 2017, and the Falcons have gone 3-1 SU and 2-2 ATS over their previous four dates with the Jets.

The Jets upset Tennessee for their first win in 2021

The New York Jets (1-3; 1-3 ATS) are coming off a surprising 27-24 overtime victory to the Tennessee Titans in Week 4. Both head coach Robert Saleh and rookie QB Zach Wilson got their first NFL wins, as well as rookie kicker Matt Ammendola, who scored the game-winning field goal.

The Jets overcame a seven-point fourth-quarter deficit, playing as 6-point home underdogs. They allowed 430 total yards but limited the Titans to just two touchdowns on their five visits to the red zone. Zach Wilson went 21-of-34 for 297 yards, two touchdowns, and an interception, while Corey Davis went off for four catches, 111 yards, and a TD.

The Falcons are back on the losing track

The Atlanta Falcons (1-3; 1-3 ATS) failed to record their second straight win this past Sunday, suffering a tough 34-30 home loss to the Washington Football Team. Mike Davis’ touchdown at the start of the fourth quarter got the Falcons a 30-22 lead, but they surrendered a couple of touchdowns in the final four minutes to blow their lead.

Matt Ryan had a good game against Washington, completing 25 of his 42 passing attempts for 283 yards and four touchdowns. Cordarrelle Patterson caught three of those four TD passes and led the backfield with six carries for 34 yards, while Calvin Ridley had seven receptions for 80 yards. Rookie TE Kyle Pitts added four receptions for 50 yards.

First, don’t forget that kick-off is set at 9:30 AM ET. Second, there’s no easy money in this clash of the two bad teams. On paper, Atlanta looks like a better team, but nobody bottles things like the Falcons do. On the other side, the Jets will try their best to get things going offensively after they scored more points in Week 4 than they did through Week 3.

I’m backing the Jets to keep it close and cover mostly because of their defense. The Falcons heavily lean on their passing game, and the Jets have allowed only a couple of scores through the air. Also, New York will have a nice opportunity to score some points for the second straight week, considering how bad the Falcons’ D has been so far this season.

The totals are a tricky wager, as well as the side bet. The Jets have a chance to improve their offense, but the Falcons also have an opportunity to get things going defensively against one of the worst offensive units in football.

Both teams should struggle to move the ball. Their ground game hasn’t impressed at all, so we could easily see a lot of punts and 3rd downs. Therefore, I’m backing the under that has hit in six of the Jets’ last eight games overall.