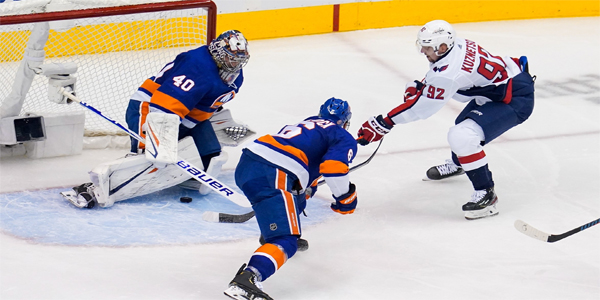 The Washington Capitals did what they had to do in order to stay alive. The next step is attempting to force Game 6 against the New York Islanders. All you can do is take it one game at a time when you absolutely have to win four in a row to survive and advance. The Capitals are one-quarter of the way there.

Bettors may have a little bit of renewed belief in the Capitals, as they are a -120 favorite in Game 5 on Thursday against the Islanders at BetDSI Sportsbook. With New York at even money, there are likely going to be some very interested parties in the underdog. The total is 5 with some over juice.

They still needed a power play goal and a 4-v-4 goal in order to come away with the win. No matter how it all played out, they won. That’s what matters in a must-win spot. They have another must-win spot on Thursday and every game from here on out in this series is a must-win.

The Islanders didn’t play well, but maybe that’s for the best. Teams seem to maybe be a little cognizant of not getting rusty in the bubble. We’ve seen some lackluster elimination game efforts to this point. The Islanders just didn’t bring the same effort or the same juice to this game that they have in other games in the series. Semyon Varlamov wasn’t quite as good. The Capitals played with a sense of urgency that the Islanders had a tough time matching.

You never want to fall victim to what you’ve most recently seen. You want to look at a larger sample. Here’s what we know about this series. Even with Washington’s win in Game 4, the Islanders have outscored the Capitals 10-3 at 5-v-5. They’ve outchanced the Capitals. They’ve had more shot attempts. They’ve more than doubled the Capitals up in high-danger chances. They’ve gotten better goaltending. They lost Game 4, but they’ve been winning the series pretty handily to this point.

Nicklas Backstrom skated without the team in Wednesday’s practice session. Backstrom has been in concussion protocol following the very questionable hit from Anders Lee during Game 1. Backstrom’s absence has been extremely noticeable in this series. The Capitals power play has still had some success, but they have not generated much 5-v-5 without Backstrom. They can’t live solely off of power play goals if they want to advance.

This line may very well be in a holding pattern until we find out the status of Backstrom. The Capitals have scored eight goals in this series and Alex Ovechkin has four of them. Somebody else has to do something for the Capitals in this series. Somebody on a bottom line needs to provide a spark. Something. Anything. Anybody. Anyone.

The Islanders, meanwhile, have had 10 different goal scorers in the series. The Capitals have had three. If Backstrom can’t make it back for Game 5, it would seem like the Capitals will need more from Holtby. The Islanders had their bad performance. It’s out of the way. They should get back to where they were earlier in the series. They’ll counterpunch. If there is anything that Barry Trotz teams are good at, it’s that counterpunch.

TAKE THE ISLANDERS TO FINISH THE SERIES WITH A GAME 5 WIN!