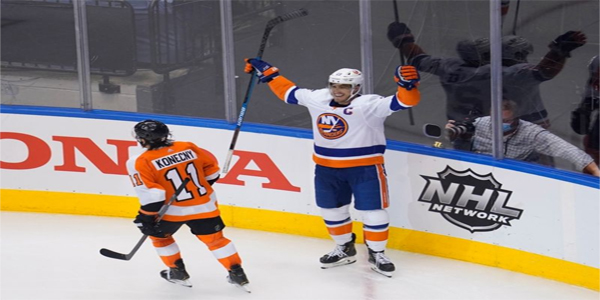 The New York Islanders have a mastermind at the controls and he keeps pushing all of the right buttons. Head coach Barry Trotz had the right gameplan for the Washington Capitals and disposed of his former employer in the first round. If Game 1 was any indication, Trotz has his team ready for the Philadelphia Flyers, too.

We’ll see if the Flyers can bounce back in Game 2. The betting markets seem to think so, as the Flyers have taken the early money across most of the industry. They are a -115 favorite at DSI Sportsbook with a total of 5 juiced at -130 on the under the day before the game.

The Islanders dominated the Capitals. It helped that Anders Lee knocked Nicklas Backstrom out for the series with a questionable hit, but New York outscored Washington 11-3 at 5-v-5 in the series. The Islanders outscored Philadelphia 3-0 at 5-v-5 in Game 1. New York had more scoring chances by three and more high-danger scoring chances by two. They also got a strong effort from Semyon Varlamov, who stopped all 29 Flyers shots.

It was a bit of a shaky game for Carter Hart, who stopped 25 of 28 shots. The Islanders added an empty net goal to make things look a little more lopsided late. The Islanders had a big net-front presence throughout the game and the Flyers weren’t able to make enough adjustments to keep Hart’s lines of sight clear. He also gave up a goal from down below the goal line on an unfortunate bounce.

The Flyers wound up settling for a lot of shots from the outside against Varlamov. They didn’t get a lot of slot chances. They were shooting from by the dots or from the point. Putting the opposition into lower-percentage scoring areas was successful in the series against the Capitals and it appears as though Trotz has isolated that as the gameplan here against the Flyers.

Philadelphia’s big guns haven’t done much at even strength in the playoffs. Jakub Voracek has three of his four goals on the power play. Scott Laughton and Michael Raffl are more along the lines of role players and they’re tied for the team lead in even strength goals. The Islanders seem to want to avoid penalties and collapse down low to prevent scoring chances from the top lines. They seem to feel comfortable at 5-v-5 in this series based on that and their dominance to this point in those game situations in the playoffs.

The Flyers simply have to find a way to generate more even strength offense with their top lines. Even in the six games against Montreal, the Flyers only had seven goals at 5-v-5 and only had 99 scoring chances. They were beaten at 5-v-5 in that series and it appears as though some of the same red flags are waving in the breeze once again.

There were questions about Varlamov coming into the playoffs. He had a fine regular season, but nothing like what Robin Lehner had last year for the Islanders. He was above average, but by no means a frequent game-stealer. He’s stopped 241 of 256 shots to this point. The Islanders have made it as easy as possible on him, but he’s made the big stops when necessary. That was something Hart did not do in Game 1, but did a pretty good job of in the first round when his team was outplayed. We’ll see how that goes here in Game 2.

For now, though, the Islanders look like the sharper team. Philadelphia eventually outlasted Montreal in the first round, but largely because the Canadiens, as was the case most of the regular season, couldn’t finish often enough. They outplayed the Flyers 5-v-5 and the Islanders did the same in Game 1.

We’ll see how Philadelphia adjusts, but Trotz also got some more information to process after seeing the first 60 minutes.

BET THE ISLANDERS IN GAME 2 AT BETDSI SPORTSBOOK!