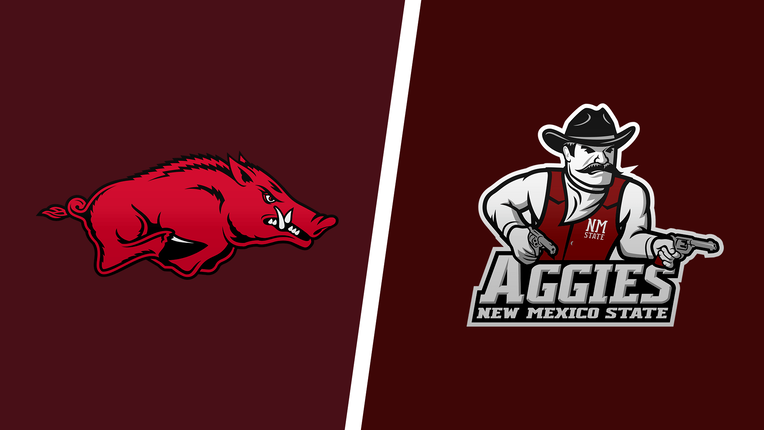 The KeyBank Center in Buffalo, New York, will host the Men’s Basketball Championship – West Region – 2nd Round game, and here you can read the best New Mexico State Aggies vs. Arkansas Razorbacks betting pick and odds. The game will tip-off at 8:40 PM ET on Saturday, March 19.

According to GT Bets Sportsbook, the Razorbacks are 6.5-point favorites with the total being set at 138 points. The winner of this tilt will face Gonzaga or Memphis in Sweet 16.

The New Mexico State Aggies (No. 50 seed overall) upset the UConn Huskies in the First Round of the NCAA Tournament. The Aggies displayed a strong defensive performance in the first half, allowing only 22 points, and despite UConn’s response with 41 in the second 20 minutes, it wasn’t enough to avoid a 70-63 defeat. New Mexico State was excellent from the perimeter (64.7%), while they limited the Huskies to 30.4%. The Aggies covered a +6.5 spread, the fourth game in a row they covered to improve to an 18-12 ATS record.

The Aggies had only one player in double figures in this win, but that was more than sufficient to beat UConn. Junior guard Teddy Allen erupted for 37 points (10-24 FG, 4-7 3PT, and 13-13 FT), six rebounds, and two steals.

Senior forward Donnie Tillman is questionable to feature on Saturday with a leg injury. He didn’t play since March 2.

The Aggies have the 50th defense in basketball that allows 65.0 ppg, while their offense averages 73.2 ppg (119th). New Mexico State is 75th in the country in defensive efficiency with 97.8 points per 100 possessions, while the Aggies are 77th in offensive efficiency with 108.6 points per 100 possessions. New Mexico is No. 79 in the NCAA NET Rankings and No. 76 in the KenPom rankings.

Arkansas edged Vermont in the First Round

The Arkansas Razorbacks (No. 16 seed overall) had a hard job in the First Round of the NCAA Tournament but successfully made it through with a 75-71 victory over the Vermont Catamounts. The rivals were pretty tied in almost every segment, but Arkansas scored 20 free throws opposite Vermont’s ten, while the Backs were better in rebounds (39-32). Arkansas didn’t cover a -5 spread, the second straight game they failed to cover to drop to a 20-13-1 ATS record.

The Razorbacks have the 164th defense in basketball that allows 68.6 ppg, while their offense averages 76.9 ppg (42nd). Arkansas is 18th in the country in defensive efficiency with 92.3 points per 100 possessions, while the Razorbacks are 38th in offensive efficiency with 111.4 points per 100 possessions. Arkansas is No. 20 in the NCAA NET Rankings and No. 18 in the KenPom rankings.

The Aggies were impressive in the opening round win, and they showed that they mean business this season after winning both regular-season and tournament titles in the WAC. Head coach Chris Jans is doing a great job, especially with Teddy Allen, who is a top 20 scorer his year. Allen will represent the biggest danger for the Backs in this one.

Arkansas already had a tough job in the first round, and I don’t think their job will be any easier this time around. The Razorbacks might get a victory, but the Aggies will surely put up a fight. Also, it wouldn’t be surprising if New Mexico State make it through.

It’s going to be an entertaining game and I expect a classic showdown between Allen and Notae, who are the top scorers of these respective teams, and their best players. Arkansas is 35th in offensive rating and 38th in offensive efficiency, so the Aggies know they will have to score as many points as possible to stay close.