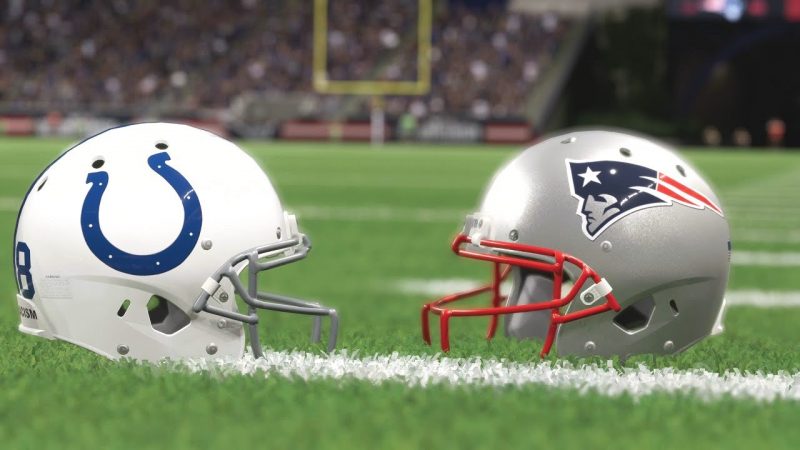 The 2021 NFL season continues with a couple of Week 15 games on Saturday’s card, including the marquee AFC matchup at Lucas Oil Stadium in Indianapolis, so here’s the best Patriots vs. Colts betting pick.

New England and Indy lock horns for the first time since 2018. The Patriots search for their ninth consecutive victory over the Colts, opening as small 2.5-point underdogs on Bookmaker Sportsbook, while the totals sit at 45.5 points.

The Pats have been unstoppable lately

The New England Patriots (9-4; 9-4 ATS) are coming off a bye, looking to extend their winning streak to eight games. They outlasted the Buffalo Bills 14-10 as 3-point road underdogs in Week 13 and took the lead in the American Football Conference.

The Pats outgained the Bills 241-230 in blustery weather conditions at Highmark Stadium. Mac Jones completed two of his three passing attempts for 19 yards, while running backs Damien Harris and Rhamondre Stevenson combined for 189 yards and a TD on 34 carries.

New England continues to torture its rivals on the defensive end. The Patriots surrender only 15.4 points per contest (1st in the NFL) on 310.0 total yards (3rd). Over their previous five showings at any location, the Pats have yielded just 36 points in total.

The Colts dismantled Houston in Week 13

The Indianapolis Colts (7-6; 8-5 ATS) are coming off a bye, too, hoping to stay on the winning path and continue with their playoff push. Back in Week 13, the Colts trounced the Houston Texans 31-0 as 10-point road favorites to bounce back from a tough 38-31 home loss to Tampa Bay in Week 12.

The Colts dominated the Texans from start to finish, holding the ball in possession for 41:35. Jonathan Taylor had another terrific game and finished with 32 carries for 143 yards and a couple of touchdowns, while Carson Wentz completed 16 of his 22 pass attempts for 158 yards and a TD.

Taylor is enjoying a wonderful season. The second-year RB has already posted 241 totes for 1,348 yards and 16 touchdowns. Interestingly, Taylor has scored a TD in ten straight outings. The Colts boast the third-highest scoring offense in the NFL, averaging 28.5 points per game.

We will see a great battle between a couple of playoff contenders. I’m expecting a back-and-forth clash that could easily go either way down the stretch, so give me the underdogs and points. The Colts are certainly capable of putting an end to the Patriots’ winning streak, but I don’t think this battle will be decided by a comfortable margin.

New England is 7-0 SU and ATS in its last seven outings. The Pats’ defense has been terrific as of late, though the Colts can lean on their defense, too. The key factor for Indy will be Carson Wentz, who has to avoid turnovers against the Pats’ aggressive pass rush and secondary.

Both New England and Indianapolis will run the pigskin as much as possible, trying to control the clock and keep the opposite defensive unit on the field. Hereof, I don’t expect to see a high-scoring affair, though you never know with these two teams. Their defenses can score as well, while the Colts have allowed 27 touchdowns on 38 red-zone attempts.

On the other side, the Pats have yielded only 16 touchdowns on 35 red-zone attempts. Their defense is the main reason why I’m going with the under. Four of New England’s last five games played in December went under the total.