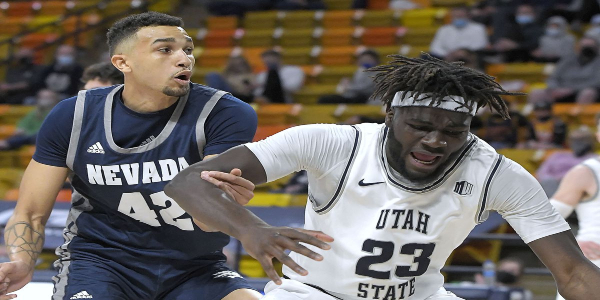 The swing game of the week will come on Sunday, as we sit 3-3 on the spotlight games for this week at BangTheBook. Our focus will be on the late game in the Mountain West Conference between Nevada and Utah State. It is the only late game of the night, so we don’t have much choice, do we?

Per the overnight lines, Nevada was +8 and -115 at Bovada Sportsbook with a total of 141.5. This is a big one for both teams, as Nevada is trying to get some kind of rhythm heading into the conference tournament off of a recent COVID pause and Utah State is hoping to strengthen an at-large resume just in case the Aggies cannot take down the MWC Tournament.

Give Nevada credit. The Wolf Pack really hung in there in a tough spot on Friday night against Utah State. It was the first game for Nevada in 19 days and it went down as a 75-72 loss. Nevada did look out of sorts a little bit, as the team went 13-of-26 from three-point range, but just 11-of-32 on two-point shots.

Nevada has shot really well on free throws this season at 76.6%. Opponents have only made 68.4% of their charity shots. That has been one really big positive for the Wolf Pack. Otherwise, there haven’t been a lot of them that really stand out. This is a good team, but not a great team. A team that would need to really go on a special run to win the MWC Tournament and take down the auto bid.

Nevada is a strong team on the defensive glass, but a bad team on the offensive glass. Nevada gets to the line at a fairly high rate, but also puts opponents on the line at a high rate. The Wolf Pack ranks third in eFG% defense in league play, so that is a bit of a feather in their caps for this season, but has failed to stand out enough on offense.

All in all, this is a team that would probably be looking at a CIT or CBI opportunity, but with COVID, that won’t be the case. We’ll see if Nevada looks as crisp in this second game and maybe has a different outcome.

Utah State can ill-afford scares like the one that they had on Friday. This is a team trying to fashion an at-large profile late in the year, just in case the MWC Tournament in Las Vegas does not go as planned. Utah State went on an impressive 9-0 run to start league play, but then dropped four of six to fall firmly on the NCAA Tournament bubble.

Craig Smith’s team did lose a ton from last season, so there were expected to be some growing pains in Logan, but maybe not to the degree that we’ve seen to this point. This is a team that ranks eighth nationally in 2P% defense and they’ve needed every bit of it because the offense has fallen off rather significantly. This will be the first time since 2014 that Utah State has finished outside the top 85 in eFG% offense and the first time outside the top 100 since the mid-2000s.

Utah State’s shooting percentages are down basically across the board this season. The Aggies are still third in conference play in 3P%, but are only fifth in eFG% offense. Fortunately for Smith and the Aggies, they lead the conference in eFG% defense.

That has been a saving grace and their 2P% defense is the reason why they were able to pull out Friday’s game against Nevada. It was actually a similar story for Utah State. They shot well from three going 11-of-21, but were just 12-of-31 on two-point shots.

With some regression coming for both teams, as they will both shoot worse from 3 and better from 2, this is a bit of a hard game to handicap. Both teams are pretty desperate here. Utah State needs a more impressive performance and Nevada is trying to figure some stuff out before the conference tournament.

Utah State led by 15 with about 8:30 left on Friday and let off the gas quite a bit. They had to survive a scare after that. Even though the last game was close and Nevada is a solid team, Utah State learned a valuable lesson. I’d look at the Aggies in this one.