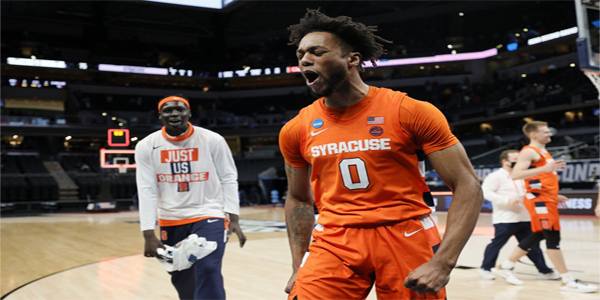 NCAA Tournament Picks — Sweet Sixteen: Syracuse is in ‘the zone’ and Houston may have a problem

By now it has become no surprise that the Syracuse Orange might handcuff opponents to a considerable extent when it comes time to play in the NCAA Tournament. If you’re a hoops fan, you know that they played a 2-3 matchup zone, which has become the trademark defense of Jim Boeheim.

And now they are handcuffing opponents once again, and pretty good ones, we might add. So after victories against San Diego State and West Virginia, the team with nine losses this season has a chance to go to the Elite Eight.

For that, they’ll have to get by the Houston Cougars, who have been one of the top teams in the nation all season long.

This game begins at 9:55 PM ET and will be televised on TBS. Customers at BetOnline can engage in Live Betting throughout the game. It’s easy to find in the sportsbook interface. And remember that there are literally tons of props to wager on for each of the games.

Generally speaking, the Syracuse zone is well-coached enough that it is extremely difficult for opponents to prepare for, and to make adjustments against once the game has started. The results in this tournament are stunning. San Diego State tried a lot of three-pointers in an effort to shoot over them, and they made just eleven of 40. After a while, you could see that they were just throwing up desperation shots, not seeming to know what they were doing.

And then West Virginia, a team that has gone toe-to-toe with some of the best in the nation, couldn’t even make TWO-point shots, as they were held to 34% inside the arc.

Houston coach Kelvin Sampson has experienced the misery caused by the matchup zone before. In 2003 he took his Oklahoma team into the Elite Eight against Syracuse. The Sooners shot 18% from beyond the arc and 31% overall and were held to 47 points.

So the Cougars have their work cut out for them.

But let’s not forget that Syracuse has to make its shots as well. The Orange have gone 53.5% from the field over their two games, and obviously Buddy Boeheim (the coach’s son) has been a focal point of the offense. Buddy has averaged 28.3 points over his last four games, hitting 56% of his triples.

Let’s make the assumption that Sampson is drawing up a decent game plan to combat Syracuse’s shooters. And he’s had some time to do it. Houston is fully capable on this end, allowing just 29.3% from three-point territory and 42.9% from two-point range. Both of those figures are among the top twelve in the country.

We understand that Houston is second best in the nation in the area of offensive rebounding, pulling down an insane 39.9% of available caroms. And that is their best shot here against Syracuse, since the big weakness of the matchup zone is that it does not do a good job of blocking out under the boards. In fact, the Orange are 340th out of the 357 Division I teams at doing just that.

But let’s remember that a team like Houston is very careful and deliberate on the offensive end. They chew up an average of 19.1 seconds on the shot clock, and that means they aren’t trying too hard to beat Syracuse down the floor.

Thus, with neither side likely to operate at full throttle when they have the ball in their hands, we’d say that our principal play here should be on the UNDER.

There are a lot of ways for you to have a great experience at BetOnline. One of them involves all the props you can take advantage of – just click on the red “plus” sign next to the listing ………… Once the game starts, you can stay involved with real-time wagers by taking the “Live Betting” option…….. And with Odds Boosters, you can get greatly enhanced payouts on pre-selected parlays, every day of the week…….. And there are many ways to open an account. A virtual plethora of cryptocurrencies are available (pardon the pun), and that includes Bitcoin!