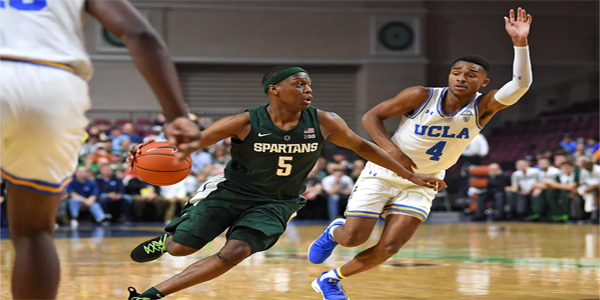 Tom Izzo, head coach of the Michigan State Spartans, has been expressing plenty of displeasure with the seeding in the NCAA Tournament, and also about his team’s position where they have to play their way into the Big Dance.

But when it really comes down to it, what they have to do is beat the team in front of them. This year, it’s the UCLA Bruins, another “legacy” program that also has to take one extra step to get into the 64-team field.

The game will get underway at 9:57 PM ET at Lucas Oil Stadium. Inasmuch as the entire tournament is being played at different venues in the Indianapolis area (and a little beyond), this like being centre court at Wimbledon.

BetAnySports is offering reduced juice on this game – and all the March Madness games – and if you want to keep wagering even after the tip, you’ve got Sports Betting Prime.

When the NCAA Selection Committee gets together to decide who is “in” and who is “out,” non-conference games often enter the formula. Well sure, Michigan State beat Duke and Notre Dame. But it’s really what happened in the roughest conference in America that impressed people.

The Big Ten slate is grueling. And in the process of undertaking that schedule, the Spartans have demonstrated the ability to deal with some elite teams, which set them apart from many at-large candidates.

MSU defeated the likes of Rutgers (by 23 points), Illinois, Ohio State and Michigan. And some of those wins against ranked teams came down the stretch, which is a really good sign, since Izzo loves to pace his team so that it’s at its best when it counts most. But they were upended by Maryland 68-57 in the Big Ten tournament, when they weren’t guaranteed anything in the way of a bid, and that is NOT a good sign.

The Spartans are hanging around after having played that tournament in Indianapolis. So they have not had to go through any additional traveling. And perhaps he should assume that Izzo is going to have his team razor-sharp mentally in the wake of what they must perceive as kind of a snub.

UCLA has lost four games in a row, all to teams who are “dancing” this month – Colorado, USC, Oregon and Oregon State – and they also lost to San Diego State and Ohio State. So there is no question that they have faced top-flight competition. But they haven’t been able to turn much of it back.

UCLA does not “go fast.” Under Mick Cronin, they are deliberate, to the extent that they are 332nd in Adjusted Tempo. Certainly they are not oriented toward three-pointers. Point guard Tyler Campbell is sure-handed, but he isn’t a shooter. Jules Bernard is almost 41% from downtown, but he kind of stands alone. Cody Riley, the 6-9 forward, has not had more than one offensive rebound in any game since January 30.

Michigan State is not a great shooting team, but they can defend and are always going to be good on the boards. And they have experience, starting two seniors and two juniors. In this “one-and-done” world, that is unusual.

The Spartans know this drill, as does Izzo, to an even greater extent than Cronin. This is a cheap price at which to get them.

During the NCAA Tournament, you’re going to be right on top of the action with BetAnySports, where you have reduced juice for better odds, in addition to Sports Betting Prime for real-time wagers………. Open an account very easily, with debit cards, credit cards, person-to-person transfers or the virtual currency of Bitcoin, where there is no transaction fee!