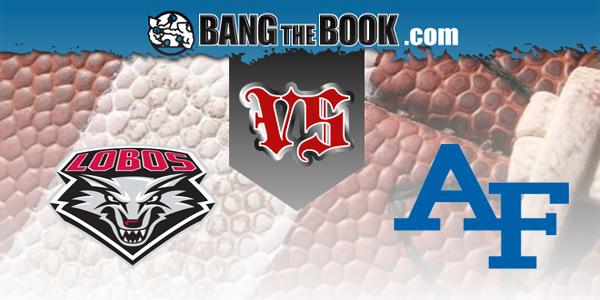 In this crazy college football season, finding teams that have NOT been disrupted in some way by COVID-19 would be the exception to the rule. Here are two teams who have been fortunate to get a season underway at all.

Air Force’s campaign had been stopped in its tracks by a number of factors, including the fact that the Mountain West Conference had called things off. The Falcons had a whole host of players who then were given the opportunity to opt out, and did just that. On top of that, quarterback Donald Hammond III was tossed off the team.

Head coach Trey Calhoun and the academy brass were fully prepared to play a two-game season – just enough to compete for the Commander-in-Chief Trophy against Navy and Army. And those guys weren’t pleased at all about that. Air Force, with what appeared to be a skeleton crew, dispatched the Midshipmen 40-7, in a result that was shocking to many. And then the Mountain West reversed field, so here we are.

But they have not played the last couple of weeks, missing games with Wyoming and Army. The Army game may be rescheduled, for the purpose of the Trophy. But New Mexico’s problem is somewhat the reverse of that. The Lobos had their first two games canceled and have played the last two weeks, losing to Hawaii (39-33) and Nevada (27-20).

Both of those games have been on the road, for all intents and purposes. You see, because of multiple virus concerns, New Mexico was forced to move its entire football operation to Las Vegas, where they actually played last week at Sam Boyd Stadium against Nevada. With pretty much a self-contained situation, they may be in a little position than Air Force, which has found itself short on players who could play safely, which led to those previous cancellations / postponements.

But BetAnySports patrons should know that the Lobos are in a rather uncertain situation with their quarterback position. Tevaka Tuioti suffered a concussion against Hawaii, which left the team with backup Trae Hall – who had lost the pre-season QB competition – to play against Nevada. Hall did okay, throwing for 195 yards, and even if Tuioti is cleared to play (which we don’t know at this time), he will likely split playing time. The Lobos also revealed another potential wrinkle against the Wolf Pack, as running back Bryson Carroll, a former quarterback, threw a TD pass to Hall.

In any case, it’s a bit of a different situation with the offense this season under first-year head coach Danny Gonzales than it was under Bob Davie, his predecessor, as more of the RPO (run-pass option) look is installed.

On defense, well, let’s just say that there is the stamp of a former New Mexico head coach on that. Coordinator Rocky Long (who formerly had Gonzales as one of his assistants) is well-known in the profession for his 3-3-5 alignment, and one of the things he has been particularly noted for is coming up with a way to combat the Air Force option. As head coach at San Diego State, he went on a seven-game winning streak against the Falcons.

Of course, we won’t deny that there has been an uphill battle from the start, because New Mexico ranked 129th among 130 FBS teams in total defense last season. But the early returns aren’t bad so far; in fact, the Lobos are allowing just 3.1 yards per rushing attempt, which is 16th best in the nation. And the big weakness – pass defense – isn’t likely to be exploited to its fullest by an Air Force squad that doesn’t spend much time in the air, throwing the ball less than 17% of the time (second-lowest percentage in the country).

And for what it’s worth, under Davie, the Lobos covered seven of the last eight meetings with Air Force. Inasmuch as they have shown an ability to hang in there against teams with pretty decent offenses in their first two games, we feel compelled to take the points with nomadic NEW MEXICO.

BetAnySports produces a great weekend in college football, with reduced juice for better odds and Sports Betting Prime for real-time wagering……… They make a lot of payment options available. These include debit cards, credit cards, person-to-person transfers and the virtual currency of Bitcoin, which is fast and easy with their automated system, and NEVER incurs a transaction fee!