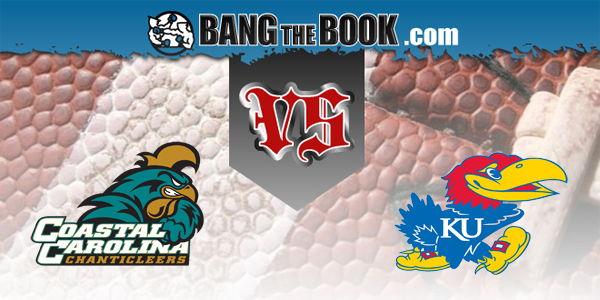 If there is some football legacy in Lawrence, it’s so far back few can remember it. Can Les Miles revive things? When he took over this program, it had produced a winning record just twice in 24 years. It is bad enough that a 3-9 record in 2019 (5-7 ATS) was actually encouraging.

Well, now the Kansas Jayhawks have a chance to avenge one of their more embarrassing defeats from last year as they play host to the Coastal Carolina Chanticleers at Memorial Stadium at Noon ET on Saturday. And if you are a BetAnySports customer, you can get tremendous value with reduced juice AND the opportunity to place wagers during the game in real time with Sports Betting Prime.

Do you remember once upon a time, when Miles was one of the hottest coaches on the market? You could understand that. He did, after all, win a national championship at LSU (2007), and there was occasional talk of the possibility of a coaching opening at Michigan, where he once played for Bo Schembechler. But Miles eventually fell out of favor, and was sent packing from Baton Rouge in 2016.

Now he has a big rebuilding job on his hands. And that is especially the case on the defensive side, where his unit allowed 36 ppg last year, ranked 128th in efficiency and brought back just two starters.

Are they better equipped to face a Coastal Carolina team that came to Memorial Stadium and scored a 12-7 win last year – the program’s first ever against a Power 5 school?

That’s not a certainty. While the Chanticleers finished o the negative side of the ledger last year (5-7, and 7-5 ATS), they lost three times by three points or less. And return 86% of their offensive production, which is an unusually high figure. Fred Payton is back to run coach Jamey Chadwell’s spread option, and he’s got four of five offensive linemen coming back to aid him.

The top offensive weapon is running back CJ Marable, who had 148 yards on the ground in last year’s win over Kansas. We’re not sure slowing him down will be easy.

In the NCAA football odds that have been posted on this game by the folks at BetAnySports, the Jayhawks are laying points, and we should note they have covered just four of their last 15 in that situation:

Playing mostly Sun Belt Conference opposition, Coastal Carolina allowed 70% completions last season, and Kansas may or may not be able to capitalize that, depending on who plays quarterback. Miles has a competition going between Miles Kendrick and Thomas MacVittie (a transfer from Pitt who was the backup to Carter Stanley last season). To Miles’ credit, he isn’t one of those guys giving lip service to the concept that both QB’s will be playing; he wants to choose a guy and stick with him if at all possible. Our money is on MacVittie, who at 6-5 can see over some defenses.

This is an offense designed around the run-pass option (RPO), and it found a little more life when Brent Dearmon was named offensive coordinator after a 45-20 loss to Oklahoma. Stanley wound up with 24 TD passes. The RPO works a lot better when you have the “R” to work with, and frankly, Kansas has one of the better backs in the nation in Pooka Williams (1061 yards, 5.2 ypc last year), who you’ll probably see in the NFL someday. There are reinforcements too, including Velton Gardner, who will see more action as a sophomore. There are four seniors in the receiver rotation, including Andrew Parchment and Stephen Robinson, who combined for 1558 yards and 15 scores in 2019.

One has to respect what Marable can do. But Kansas senior linebacker Dru Prox, the team’s best tackler, is back from injury, and he is a capable, experienced anchor if healthy.

We’re not sure this Jayhawk squad is considerably better, but it should be at least a little better, and the payback angle here has to mean something, because another loss to CCU might open up a lot of questions about Miles’ job status. Rock, chalk, Jayhawk…… but don’t go overboard. This line has moved upward quite a bit. In a game where the running backs are the best part of each offense, perhaps the “under” works better.

BetAnySports delivers all the thrills of college football this season, with reduced juice available to give you a better deal and Sports Betting Prime to keep you right in the action until the final whistle!………. Remember that you have a lot of payment options, including debit and credit cards, person-to-person transfers and the virtual currency of Bitcoin, which is fast and easy with their automated system, and NEVER incurs a transaction fee!