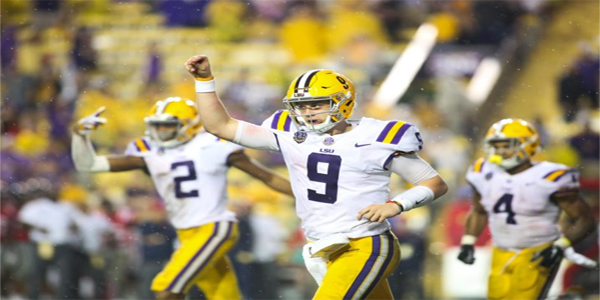 Joe Brady transformed Joe Burrow into a Heisman Trophy winner. And Joe Burrow’s exploits may eventually turn Joe Brady into a head coach in the NFL.

People like to engage in a lot of speculation about what Burrow will be able to accomplish at the next level of play. And it is assumed that he will be the first choice in the NFL Draft, by the Cincinnati Bengals. But first things first – there is a national championship to win. And that game takes place on Monday night at the Superdome (8 PM ET), with the LSU Tigers, likely to have a healthy following in New Orleans, facing the Clemson Tigers, who are in their fourth national title game in five years.

Remember that if you’re a BetAnySports customer, you can place wagers even after the kickoff with Sports Betting Ultra. Also remember that there are a load of props you can become involved with, including more than a few that concern the LSU quarterback. Like these, for instance:

No one is going to deny that Burrow has been magnificent. But that doesn’t mean he can’t be curtailed a bit. One example came in the October 26 game against Auburn – another Tigers vs. Tigers matchup – when Burrow had to face a defense that was using, for all intents and purposes, seven defensive backs. He was held to 7.6 yards per attempt and ten yards per completion, far off his season averages of 10.9 and 14.0, respectively. The plan was to keep everything in front of them if they possibly could. The result was that the Bayou Bengals barely escaped at home by a 23-20 count.

So it is not inconceivable that a team that is #2 in the nation in Total Defense and #1 in Passing Efficiency Defense, with two weeks to prepare, could cook up something that will make Burrow a little uncomfortable back there. Brett Venables, the Clemson defensive coordinator, is one of the most respected assistants in the country, and won the Broyles Award in 2016, emblematic of college football’s top assistant coach. He’ll have to scheme against Brady, the LSU passing game coordinator who was this season’s Broyles winner. Venables is the second highest-paid assistant coach in the country (outdone only by his opposite number, LSU D-coordinator Dave Aranda), and there is tremendous continuity on the staff, because they are the highest-paid group in the nation.

Clemson permitted only 52% completions this season, allowing only 5.5 yards an attempt. They gave up nine touchdown passes and made 19 interceptions, exceeded in that category only by Oregon and FAU. In other words, even though LSU has beaten no less than six teams who were in the top ten when they played them, this is probably the stiffest stop unit they’ll face.

Of course, they DID allow Justin Fields to throw for 320 yards against them a couple of weeks ago. But they kept the big plays to a minimum.

Burrow’s numbers are off the charts — 77.6% accuracy, 55 TD’s, six interceptions. And we’re pretty sure he won;t be stopped cold. That having been said, I think in the years to come we’re going to find out he won’t be as good a quarterback as his Clemson counterpart, Trevor Lawrence. On this end, I’m not convinced he isn’t simply the product of a system, coached up pro-style by Brady. Of course, at this level it’s working wonders. But what I don’t see is Burrow dropping back, planting, and really threading the needle down the field. And I don’t see him going long too often where the ball isn’t up for grabs. In other words, he ain’t Joe Namath. His best mode of operation is to throw the short-to-medium pass and let his receivers do the work.

The reason I say all this is that if there are some inherent flaws in what this guy does, and can be exposed at some point, it might as well be the nation’s #1 passing efficiency defense that does it. While I do believe that Clemson’s secondary will let him do the dink-and-dunk stuff, I think they will want to have those receivers in front of them so that they don’t become long “yards-after-catch” gains.

So while I do think he’ll throw it a lot (LSU throws the ball a little more than 53% of the time), and complete a lot of passes, I’m not sure it’s going to work out as well as he wants from a yardage standpoint. He has thrown for more than the posted 369.5 only five times in 13 games against FBS (Division I) competition. Would you expect more against the #1 passing efficiency defense? So we would go OVER on the completion prop and UNDER on the yardage prop (yes, even laying the -130).

And yes – on one of those occasions when he decides to get a little too ambitious, he’ll get picked off by a defense that does such a thing as well as anybody. Ohio State’s Justin Fields, who suffered just ONE interception all season long, was intercepted twice by Clemson. So sure, we’ll grab even money there.

BetAnySports affords you the opportunity to get better odds with reduced juice, and then, after the game kicks off, you can keep the action going with Sports Betting Ultra…..And of course, there are all the props you could ever hope for… There are plenty of ways to open up an account; use your debit or credit card, person-to-person transfers or the virtual currency of Bitcoin, which is fast and easy with their automated system, and NEVER incurs a transaction fee!