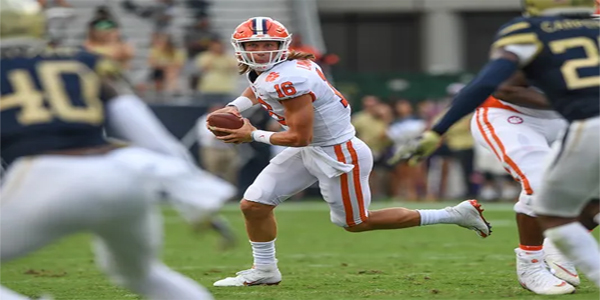 Last year the Clemson Tigers rolled up 619 yards of offense against the Virginia Cavaliers, on the way to a 62-17 victory. The encouraging news for Virginia is that they were able to integrate QB Brennan Armstrong into the lineup rather seamlessly, but is he going to be the dual threat Bryce Perkins (his predecessor) was? And what, exactly, will help against the #1-ranked Tigers, who have become a Juggernaut on the order of Alabama under Dabo Swinney?

The possibility of Clemson suffering an upset loss isn’t what worries us. What worries us is the possibility that Swinney will pull quarterback Trevor Lawrence in the second half as he did against Wake Forest, and the Cavs may come ambling in through the back door. With the NCAA football betting odds at 28.5 points, that could happen. And don’t forget that Clemson has Miami on deck next week, and the ‘Canes are suddenly a real threat in the ACC with Rhett Lashlee’s ramped-up offense. We’d pass on laying the points here, although going over 55 may be somewhat feasible.

I have to admit to being at least a little surprised at the ease with which Mike Leach’s Air Raid offense was able to move the ball against LSU last week. It took a while to sink in – KJ Costello threw for 623 yards against the defending national champions. This kind of thing wasn’t expected out of Costello, who was in a much more conventional, pro-style, run-first offense at Stanford. But it is obvious that Leach, who coached in the Pac-12 at Washington State, saw something.

So now the Bulldogs are in a position where they have to avoid the letdown against an Arkansas squad that did indeed cover the pointspread, even in a 37-10 loss to Georgia. The 3-3-5 defense that has been installed this season does have a tendency to confuse some opponents at first, so maybe Feleipe Franks, the Florida transfer who threw a pick-six last week, will get caught up in all that. Wanna know the scary part? Mississippi State, which is now an aerial circus, actually RAN the ball for 460 yards in last year’s 54-24 pasting of the Hogs. And we’re not sure Leach wants to take the foot off the gas pedal at this stage. Lay it.

Last year’s meeting was a rough one for the War Eagle, as Georgia emerged with a 21-14 win despite just 110 yards through the air and only 16 first downs. Not sure the Bulldogs’ quarterback situation is all that solid, but if you go into this game with any thoughts of taking the points you go into it with the understanding that you believe in Bo Nix. He came in very highly-touted out of high school, and though he was spectacular at times against Oregon in last year’s opener, he kind of imploded against top SEC schools like Florida and LSU.

This year he has Chad Morris as a play-caller. Maybe his role is as a coordinator, as he was at Clemson, rather than a head coach, which didn’t work out for him at Arkansas. Just throwing that out there. Nix must minimize mistakes. That would seem to be the key (no rocket science there) in a game that may be very tight all the way to the finish. We’re taking the points.

We’re only mentioning this because it is a true “Recovery Bowl.” One of these teams (Texas Tech) lost a 15-point lead in the last two minutes and then lost in overtime to Texas. The other team (Kansas State) just scored a huge upset win over Oklahoma.

In their own way, both these teams have to recover from that. Who will do it better? I’m thinking it’s Texas Tech, which has the more explosive guy under center in Alex Bowman and the knowledge that they were probably the better team on the field last week in Lubbock. Furthermore, I’m not sure that the Sooners were going to have an easy transition anyway, with a freshman quarterback after two Heisman winners and a contender in Jalen Hurts. So we’ll “take” here.

NCAA football reigns supreme at BetAnySports. Look at all these options you get, including the ability to place wagers while the action is in progress with Sports Betting Prime……… Before the game kicks off, get extra value with reduced juice………… Enjoy the games of chance with three no-download casinos, and three more with live dealers……. Make your deposits with a debit or credit card, person-to-person transfers or the virtual currency of Bitcoin, which is fast and easy with their automated system, and NEVER incurs a transaction fee!