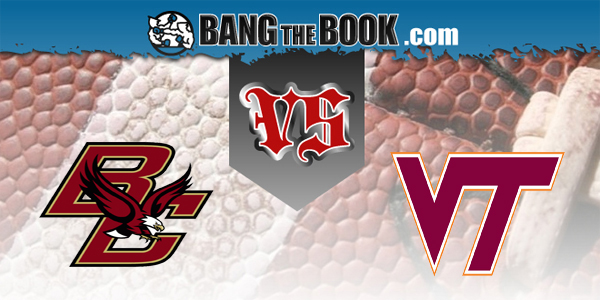 There is something of a different look about the Boston College Eagles these days. We didn’t necessarily say “better,” but different. While we’re at it, though, it may be better, because the Eagles are no longer that team that plays like it is stuck in the mud. They’re throwing it like they had Matt Ryan behind center again.

The interesting part of it is that if they could run it the way they did last year, they’d take full advantage of a Virginia Tech Hokies defensive front that has let itself get pushed around. We’ll see what happens when these clubs meet at 8 PM ET in Blacksburg.

This isn’t like the old days, when Virginia Tech was tough as nails to move an inch on. Bud Foster, who was with the program seemingly forever, and even after the retirement of the legendary Frank Beamer, would have had a heart attack on the sidelines if he had seen the performance from this stop unit last week, as North Carolina ran up 399 yards on the ground and a positively evil 666 yards overall. It is obvious that the COVID-19 crisis has had an effect on the V-Tech program, although scoring 83 points in wins over NC State and Duke established some confidence in what they’re doing. At any rate, all three games for the Gobblers have gone “over” the total, now comes Boston College, which doesn’t much resemble what we were used to seeing from previous coach Steve Addazio; that is to say, these guys can actually pass the football. Yes, they can, to the tune of 295 yards a game, which is 15th in the country and more than the likes of Memphis, Louisville, Texas Tech, Iowa State and so on. You get the picture.

And part of that picture was bringing aboard a transfer from Notre Dame. Phil Jurkovec was ranked the #4 dual threat quarterback in the country coming out of high school, according to one scouting service, and though he himself is mobile, there wasn’t a lot of upward mobility in the Fighting Irish program. He’s doing A-OK with BC, hitting on 65% of his passes with eight touchdowns. They’re only running it 43% of the time, compared to 67% last year, when they had the great AJ Dillon (now in the NFL), so it doesn’t make any sense to look at tape on them from the 2019 season.

When first-year coach Jeff Hafley took over, he wanted something more aggressive and dynamic on offense, and he has it. But defense was also a priority, as one might expect from someone who was the coordinator of that unit at one of the top programs in the nation (Ohio State). He didn’t have many returning starters, but the numbers indicate things are moving in a positive direction, as the Eagles are limiting opponents to 4.9 yards a play. That’s a Top 20 stat.

And for those BetAnySports patrons who want to keep going with the statistics, BC has gotten a pretty good “stuff rate” (holding opponents to negative yards or no gain) on rushing plays, ranking 17th in that category. Meanwhile – and we do admit to there being a small sampling – Virginia Tech is dead last in a number of metrics that the analytics site Football Outsiders uses to measure the performance of a defensive line, including Adjusted Line Yards (perhaps the most important) and Opportunity Rate. Whether Boston College elects to attack with the ground game is another question.

V-Tech returned 16 starters to the fold this season. But what seemed to impress a lot of people was that they were able to pin a 45-24 loss on NC State despite missing 23 people, including defensive coordinator Justin Hamilton. Fair enough. But Hamilton’s defense hasn’t recovered. Boston College has won the last two years with a simpler offensive game plan. And they have really been a solid underdog, covering 17 of the last 23 in that situation. So we will take the points.

NCAA football betting is an absolute blast at BetAnySports, where you can leap into the stratosphere with reduced juice, for better odds, and experience the “software of tomorrow” today with Sports Betting Prime, which enables real-time wagering……. Get started by using your debit or credit card, person-to-person transfers or the virtual currency of Bitcoin, which is fast and easy with their automated system and NEVER incurs a transaction fee!