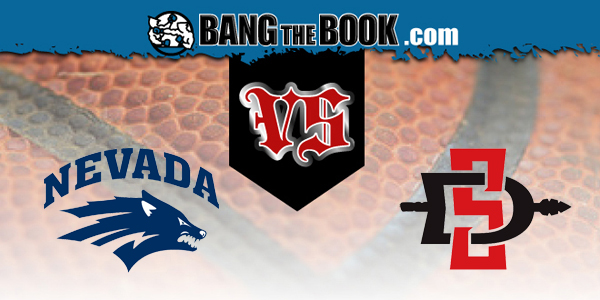 It wasn’t all that long ago that the Nevada Wolfpack and San Diego State Aztecs we’re serious contenders for spots in the Final Four. SDSU is a little below that level right now, while Nevada still has a ways to go. These Mountain West Conference teams will clash on Thursday night at 10 p.m. Eastern at the Viejas Arena in San Diego.

It’s a game that will be carried live by the CBS Sports Network, and keep in mind that if you are a BetAnySports customer, you can place wagers on this game as it is in progress, utilizing the state-of-the-art software from Sports Betting Prime. And before the game, you can get a real break on the odds through reduced juice.

This will be the first of back-to-back games between these teams at the same location, which is the way the Mountain West is scheduling things in the pandemic.

Eric Musselman had a tremendous team in Reno a couple of seasons ago, going 29 – 5. And he had great talent like the Martin twins (Cody and Caleb), big man Jordan Caroline and others. One of the keys to their success was that they were a very experienced team, laden with juniors and seniors it didn’t hurt that they had some jucos). .

But it’s a new day now; Nevada bid adieu to Musselman, who went to the University of Arkansas. and Steve Alford is in his second year as the head man. You may remember Alfordas an All-American guard under Bob Knight and Indiana, and then the coach of several programs, including Iowa and UCLA. What he has now is the 28th least experienced team among the 351 Division 1 squads. He did manage to win 19 games with this crew last season. But losses to opponents like Air Force and Grand Canyon indicate but they are not operating on the same level as Thursday night’s opposition.

San Diego State coach Brian Dutcher had the unenviable task of taking over for Steve Fisher, who had become something of a legend at the school, this coming after he had won a national title at Michigan. Of course, this is the alma mater of Kawhi Leonard, but perhaps their best team was in uniform last season, as the Aztecs won their first 26 games and were firmly embedded in the top 10.

This year they have yet to hit their stride, losing games to BYU and Colorado State, but they do have victories over UCLA, Arizona State and Saint Mary’s.

In the NCAA basketball betting odds that have been established on this game by our friends at BetAnySports, San Diego State is the double-digit favorite:

The Aztecs swept their two games against Nevada last season, and one of those was a rather dominant defensive performance, as they held the Wolf Pack made just six out of 29 from INSIDE the arc in a 68 – 55 win.

This is a team that is very dependent upon 3-point shots, taking 45% of their attempts from downtown. And their accuracy absolutely justifies it; at 38.4%, there are among the top 30 in the nation. Jordan Schakel, a 6 – 6 junior, is hitting 45.5% from long range, while mighty mite guard Terrell Gomez is 43.6% accurate.

San Diego State will absolutely work the ball around for a good shot, and more often than not they will get one. This is a patient’, experienced team oh, so much so that only seven teams in the nation have a greater aggregate of experience.. And generally they are pretty good at driving their opponents outside to take shots; Nevada is not a particularly good team shooting from either inside or outside the three-point line. And while San Diego State prides itself on creating turnovers (almost 24% of all possessions), Nevada is only 215th in the nation in turnover percentage on offense. This may not trigger a transition game, but it will eventually cause some quality shots on the part of the Aztecs.

Because of their ability to hit those triples, we’re going to give SDSU a lot of weight in our analysis, as it at least gives them the ability to extend margins. So we are going to lay the points with the double-digit favorite here.