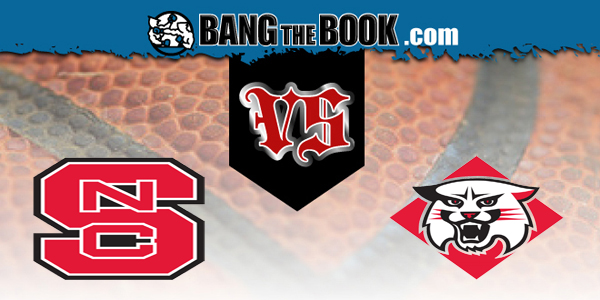 The Davidson Wildcats and North Carolina State Wolfpack are located about 125 miles away from each other, as the crow flies. But it goes without saying that the conferences these teams compete in are even farther apart from each other.

Nonetheless, when we get to post-season play, and especially a tournament like the NIT, a factor like that might not be as significant as it usually is.

This is not exactly a “backyard battle,” as the NIT is being played in its entirety in the Dallas-Fort Worth area. But it should be a spirited clash nonetheless at the Super Pit in Denton, which is the regular home of the North Texas Mean Green.

ESPN will televise, and BetAnySports allows for you to watch the action and wager on it in progress, through the magic of Sports Betting Prime.

NC State has won five of its last six games, but they were snuffed out pretty good (89-68) by Syracuse in the ACC Tournament. But they did score a couple of notable victories along the way, beating North Carolina and Virginia.

The Wolfpack is more than adequate from three-point range, hitting at a 36.3% clip. We wonder if they can do that well if they would shoot from downtown a little more – but less than one-third of their attempts have been long ones.

They characteristically make their opponents work for a shot in the half-court setting (as they use up an average of 18 seconds on the shot clock), but look for them to try to create additional possessions through turnovers.

Davidson is not necessarily going to be all that accommodating in that area. The Wildcats are careful with the ball and they don’t have a big problem with being patient; in fact, they are 353rd in the nation in Adjusted Tempo, which means there are just four teams who operate “slower” than they do.

You may know that Davidson is the alma mater of Steph Curry, who is celebrated as one of the premier three-point shooters in NBA history. They have the same coach now as they did then. Bob McKillop is in his 25th season, and his team has had a winning record in each of the last twenty. Curry took the school to the Elite Eight in 2008. This year’s version of the team is also reliant on the three-point shot; in fact, 48.4% of their shots and 40.4% of their total points come from there.

The marksman NC State may have to worry about most is Hyunjung Lee, a 6-7 South Korean who is 46% accurate beyond the arc. That’s far from the only weapon they have; Kellan Grady is a 38% triples shooter and has scored at least 20 points nine times, including 32 against George Mason in the Atlantic-10 tourney. Luka Brajkovic, the 6-10 pivot man, actually led the A-10 in two-point shooting at almost 71%.

Working from shorter range may be problematic for Davidson against 6-11 Manny Bates, who led the ACC in Blocked Shot Percentage. But that’s why it’s good that the ‘Cats can stretch things out. They won’t get beat too badly in the size front, if at all, and we think the game means more to them. So we’re inclined to lay the small number.

Whether it’s the NIT or NCAA Tournament, you’re going to be right on top of the action with BetAnySports, where you have reduced juice for better odds, in addition to Sports Betting Prime for real-time wagers………. Open an account very easily, with debit cards, credit cards, person-to-person transfers or the virtual currency of Bitcoin, where there is no transaction fee!