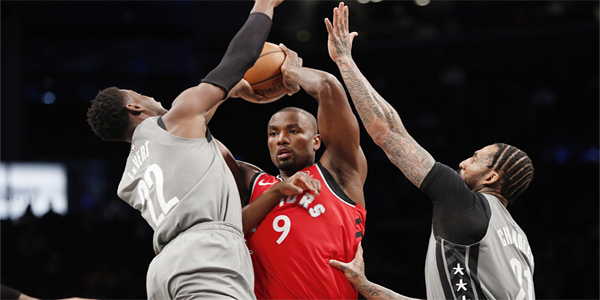 The Brooklyn Nets have to be considered a “feel-good” story in the NBA bubble. They were tremendous underdogs who literally overcame a lot of genuine adversity, and here they are in the playoffs for the second consecutive year. BetAnySports customers are rightfully charmed by what they’ve been able to do, but at the same time they wonder whether the clock has struck twelve on this Cinderella story.

That’s the kind of thing that could happen against the defending champion Toronto Raptors, who have played extremely well in the seeding games, winning seven of eight.

Coming into the bubble, the Nets were already without the likes of Kevin Durant, Kyrie Irving, Taurean Prince, Nic Claxton, Spencer Dinwiddie, Wilson Chandler and DeAndre Jordan. That constitutes practically an entire rotation. But fortunately they still had Caris LeVert, who has taken on the role of “go-to guy” in a big way. LeVert was expected to take on a considerable burden, and he has responded. He has had the fifth highest Usage rate in the seeding games, and lest anyone think that he’s been a ball hog, he’s also shared it, to the tune of 6.7 assists per contest.

The Nets went 5-3 in these last eight games, bringing their record to 35-37 straight-up (37-35 against the basketball pointspread), and Jacque Vaughn, who replaced Kenny Atkinson on an interim basis as head coach, may have been able to extend his tenure with the job he’s done.

But he’d have to do a super-human job to beat the Raptors. According to the NBA playoff odds posted at BetAnySports, the Nets are huge underdogs:

There were some who even wondered whether Brooklyn could win more than a game or two. But they have defied all of that.

At the heart of their success has been a decision on the part of Vaughn to get LeVert a little more out “in space,” by playing him at the high post in a scheme where the offense ran through him. This gave him more opportunities to have the ball in his hands.

And the offense has worked; the Nets scored 115 or more points in six straight games. Remember, however, that they are going against a Toronto squad that had the best Defensive Rating in the seeding games. NBA bettors need to consider that the Raptors can conceivably take the Nets’ best option away, so they need to have more ammunition.

Sure, they have Joe Harris, who is a very talented shooter from long-range, as well as Jarrett Allen, who has made a lot of progress at the center spot. One pickup who could be critical in the playoff series is 40-year-old Jamal Crawford, who can still add instant offense off the bench. That is, if his hamstring doesn’t act up.

Vaughn has done a great job of improvisation. And maybe you could have named him NBA “Coach of the Bubble” (with apologies to Monty Williams of Phoenix). But everyone know that the lack of depth is going to catch up to this team sooner or later. And when you play against a team like Toronto, which is so sound on both sides of the ball, “sooner” is the operative word. You can get a price of +140 on Toronto winning this series both in five games or four games. So take your pick.