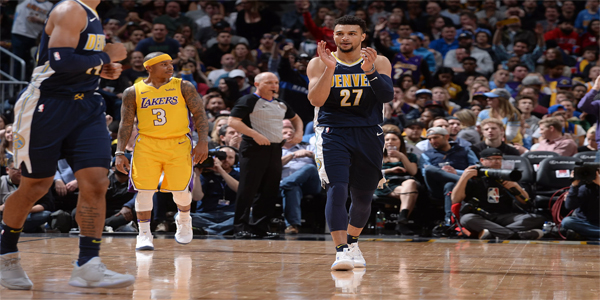 Well, we know that the Denver Nuggets have come back from a couple of 3-1 deficits in a row to advance to the Western Conference finals. But they haven’t come back from 3-0, at least not anytime in recent history. If they don’t win on Tuesday night, however, that is exactly what they’ll have to do against the Los Angeles Lakers. Game 3 of the series takes place at the bubble at 9 PM ET on TNT. And remember that if you’re a BetAnySports customer, you can get reduced juice on this one, in addition to real-time wagering through Sports Betting Prime.

So what is behind the Lakers’ lead thus far?

In terms of the battle of the boards, that is something the Lakers are winning, to the extent that they have an offensive rebounding percentage of 30.7%. And that can’t even be attributed to the presence of Dwight Howard on the second unit. He’s had just one offensive board thus far.

Not one player has necessarily owned the boards for the Lakers, but there is no question as to who is making an impact in the paint. Yes, Anthony Davis has taken seven three-point attempts, including the one that clinched Game 2 in the final seconds. But he has also demonstrated the ability to get to the line, making 19 of his 22 free throws. We had talked about this at the outset of the series; the Lakers could match Denver to more than a reasonable degree with size. And that can mitigate the effect of the Nuggets playing “big ball.”

But it’s interesting – both teams have been shooting pretty well. Los Angeles’ top three scorers – Davis, LeBron James and Kentaviuous Caldwell-Pope – are all hitting better than 50% from the field, and what the Lakers have gotten from the outside has been more than serviceable.

Denver is doing a little damage at the line as well. Nikola Jokic is going to get his chances in the lane. And he may wind up shooting more threes. But Jamal Murray is attacking the basket, and that is encouraging for Michael Malone’s squad.

In the NBA playoff odds posted on this game by the people at BetAnySports, the Lakers are once again favored:

If you are looking for upside on the part of the Lakers; well, Kyle Kuzma and Denny Green have not heated up yet from the outside. And that is something for the Nuggets to worry about.

But no one wants to sell Denver short. When a team has come back from being down 3-1 twice in a row, they can’t been discounted. Now, maybe you’re saying to yourself that all of that struggle took enough out of the team that it has carried over to this series, but remember that they did come back from a ten-point halftime deficit to put themselves at the doorstep of victory, only to be turned back by a triple from a guy who isn’t usually counted on to make triples.

We have to wonder whether the Nuggets need a real outburst form Murray, like he showed against Utah. What was that, 142 points over a three-game stretch? Maybe not that epic, but something heroic nonetheless. This team certainly can’t afford to not have him on the floor; they were outscored by 18 points when he was not in the game, and that came in less than four minutes. Ouch.

No, the second unit doesn’t appear to be Denver’s friend here.

This has to be the “all-in” game for them, so I am not sure they are going to fiddle around getting cute with defensive lineups that are designed to thwart LeBron, for example. I can see them sacrificing defense for some offense, and as it is, that defense hasn’t prevented the Lakers from shooting almost 49%, which is better than their league-leading percentage. I’d have to really lean heavily to the OVER on this one.

BetAnySports has some great possibilities available for NBA playoff betting. Certainly one of them is reduced juice, which can offer you more value every time you play. Be on the lookout for player props as well. And you are never out of the action with Sports Betting Prime…….. Open up your account with a debit card, credit card, person-to-person transfer or the virtual currency of Bitcoin, which is fast and easy with their automated system, and NEVER incurs a transaction fee!