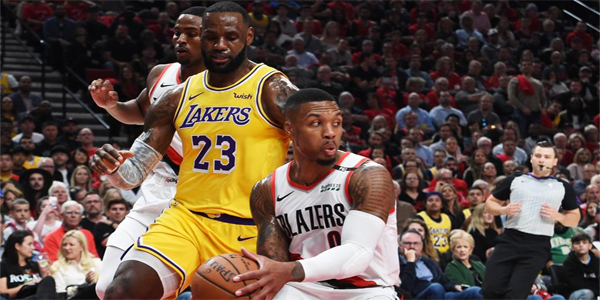 The Los Angeles Lakers have appeared ready to stay on track to the ultimate goal – winning an NBA title. BetAnySports customers shouldn’t necessarily be swayed by their record in the “seeding games,” but they might sense some concern with other factors.

Will this team take control of the other factors? That’s a pertinent question as the top-seeded Lakers take on the Portland Trail Blazers in a first-round playoff series.

There is no one who wouldn’t consider the LeBron James-Anthony Davis combination the major reason this team finished with a 52-19 straight-up record (36-34-1 against the points). And it is especially worthwhile to note that James shared the scoring load and became more of a playmaker, with a league-leading assist average. JaVale McGee, with championship experience, is a good complement to those guys up front, so L.A. is in pretty good shape there.

What they have to be a lot more worried about is the loss of two players in the backcourt who would have played a major role in any drive to the title, as it just so happens they would have been called upon to mitigate what Portland does best.

In the basketball playoff betting odds that have been posted on the series by the folks at BetAnySports, the Lakers are the favorites:

As everyone knows, Damian Lillard and CJ McCallum can combine for 50-60 on any given night. So it stands to reason that someone has to defend them. The last thing you want to do is rely on second and third team players to deal with the two potent scorers. But this is what the Lakers are faced with.

Avery Bradley elected not to go into the bubble, for personal reasons. He has developed a reputation as one of the league’s best defenders at his position. And Rajon Rondo suffered a thumb injury that has taken him out of action. Also known as a defender, Rondo is not stranger to leading a team to a championship, having done so, and with a certain degree of aplomb, while playing alongside the “Big Three” in Boston.

It’s not as if the Lakers don’t have guards they can use. Kentavious Caldwell-Pope is a veteran. Quinn Cook operates with a pretty good motor. Dion Waiters and JR Smith were recent additions. But these guys are not going to serve as a major impediment to either Lillard or McCollum.

For those who put some stock in what happened in the seeding games, the Lakers were 21st of 22 teams in scoring during that period, and hit an awful 30.3% from three-point range.

So naturally they will be looking for contributions from people who can shoot long distance, like Kyle Kuzma, Waiters or Danny Green (another guys who’s been in a lot of playoff games). One of the things that was critical in building out this roster was to surround James and Davis with players who had “been there before.”

Three-time Defensive Player of the Year Dwight Howard would have to be considered one of those players. And so they will directly challenge the Blazers, who may have to play Hassan Whiteside more than they intended.

Unless they can dominate things up front, against a Portland team that has fortified itself in that area, this might open the door for the Blazers to win at least a couple of games.