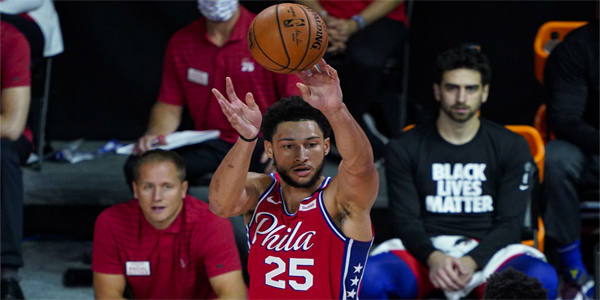 BetAnySports customers might have to evaluate the Philadelphia 76ers without their 6-10 All-Star who was formerly the #1 pick in the draft and has delivered for the most part.

Ben Simmons suffered something called a left patellar subluxation on Wednesday. It sounds serious, and it might indeed be. Or maybe not. In layman’s terms, his kneecap snapped out of place and snapped back in. But we imagine not comfortably.

No one at this point is certain whether this will be something that severely impacts them in the playoffs.

Simmons has been, for most of his 76er career, a point man, whether you want to refer to him as a “point guard” or “point forward.” But he has filled that role without exhibiting much of an outside shot. He has made only a handful of three-point shots in his career, in fact.

What head coach Brett Brown was hoping was that he could add some diversity and spice to the lineup by inserting Shake Milton at the point guard position and moving Simmons to the power forward, or the “four.” That way he could get playmaking from either spot. No one doubts Simmons’ ability to penetrate and be effective that way. But if you can’t stretch defenses, it can eventually lead the problems.

Will they have those problems against the Portland Trail Blazers? They will meet them on Sunday night at 6:30 PM ET at the VISA Athletic Center (ESPN Wide World of Sports Complex) that will be televised by NBA TV.

There are people who expected the Sixers to have been further along in their development by now. And they’ve been disappointed in that. Maybe it is because an ideal lineup hadn’t been out on the floor. So there was hope for the new configuration.

The odd man out here was Al Horford, who has played an awful lot of center in his NBA career but could not seem to find a lot of chemistry alongside Joel Embiid inside the arc. Brown had him coming off the bench, but that is no longer the case.

What BetAnySports patrons might find interesting about Philadelphia’s situation is that when Simmons was out of the lineup before the coronavirus break, they were producing at a higher rate from beyond the three-point line (42.3% in eight games, in fact). One of the motivations behind putting Milton into the starting backcourt was that he is a 45.7% shooter from long range.

If Embiid and Horford can provide enough of a threat inside (which they should), that would open things up more on the outside. And a change in the look of the offensive approach might catch some opponents off-guard. But remember that Simmons is an All-Defensive selection who led the league in steals coming into the bubble, so you have some of that to make up for as well.

If you’re looking for defense, Matisse Thybulle is a guy who can provide it. But the rookie is still finding his way on the offensive end. Trey Burke is somebody who can help run the offense. Alec Burks is a veteran hand. Tobias Harris has played more minutes than anyone in the league.

One of the things you probably need to consider here is that the Sixers’ priority has to be keeping healthy for the playoffs. They could realistically be anywhere from fourth to sixth in the East, and we refuse to believe that Brown is going to go balls to the wall to move them up a notch, although facing Miami or Indiana would probably be preferable to going against Boston.

Portland is a team that has to be considered desperate at the moment, inasmuch as they are among a whole pack of West teams vying for the eighth and ninth playoff positions. As we write this, only 2.5 games separate #8 through #13. Of all these teams, though, the Blazers have found playoff success most recently, as they went to the West finals last season.

The cast is now healthier. Jusuf Nurkic came back, as did Zach Collins, and an after-effect is that the Blazers won three of their first four seeding games. beating Houston and Denver recently has been a feather in their cap. And Damian Lillard, who didn’t even want to go into the bubble at first, is just tearing things up. He’s averaging a shade over 31 points in the first four games, playing almost all the minutes, and he had 45 against Denver on Thursday.

Nurkic, a versatile pivot man, opens things up so much. He’s picked up where he left off, with 22 points and eleven rebounds per game. And Carmelo Anthony has chipped in with some big efforts, including 21 points against Memphis in the re-opener.

Make no mistake about the fact that a Blazer team that is at or near full strength is a much different team than the one that found itself outside the top eight coming into the bubble. And against a Philly club that may still be feeling its way around being “Ben-less,” we wouldn’t be surprised if Portland were to score a double-digit straight-up win.