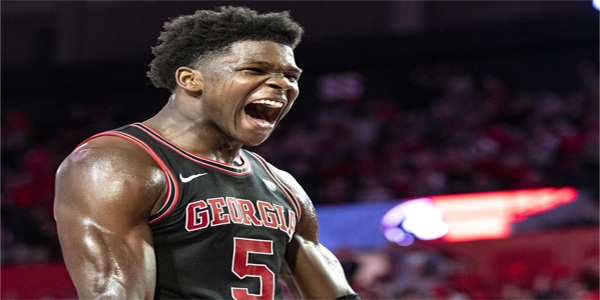 NBA Draft Props — Who Will – And Should – Go First Overall?

It has been said by many of the “experts” that this is a “three-man NBA Draft.” What that means is that there are three players who are head and shoulders above all others. The experts maybe know and maybe don’t – many years ago I ran an NBA Draft website that got quite a bit of attention, particularly from player agents – and really, what the hell did I know?

At any rate, BetOnline has determined that there is indeed a “Big Three” because they are the only ones posted in their prop for the #1 pick.

The Minnesota Timberwolves are “on the clock,” so to speak. What is unique about this draft is that there is no slam dunk #1, so we might not know until the announcement is actually made on Wednesday night.

To Be 1st Overall Pick

I have kind of resigned myself to the idea that Anthony Edwards – the freshman out of Georgia – is going to be the #1 pick. And there are definitely some things in his favor. He can be that “combo” guard who comes in and can guard a couple of positions and maybe even a third, if and when this team goes small.

He can score in a variety of ways. And the scouts testify as to his physical strength, so that he can be assertive in terms of getting his shot.

There is little doubt in my mind that he can score 20 points a game in the NBA.

But let’s go back to the part about him guarding multiple positions – which is very important when you have to deal with the pick-and-roll and other ways opponents make you switch in the NBA. That makes the assumption that he has an aptitude toward defense, and frankly, that’s not an assumption that can’t freely be made. Edwards is not known to be a defender, so there is going to be a big learning curve with that.

He is not a real good free throw shooter either, and that is going to be a handicap for him as he attempts to be primarily an offensive player in the NBA.

Here is another item that would worry me if I was a T-Wolves fan, and this is no small thing. In his only season at Georgia, he had nice numbers, tallying more than 19 points a game, but his team was not headed to the NCAA Tournament. In fact, at 16-16 and with a likely loss to Florida on deck in the SEC Tournament when everything got called off, the Bulldogs weren’t likely to go to the NIT or the CBI either.

Now let me remind you that when these NBA teams take the floor, the idea, presumably, is to win. So you are drafting with that in mind, right? And ideally, the guy you make the #1 overall pick is hopefully going to be a transformative figure of sorts, correct? You would expect that someone who was good enough to be the top pick in the draft could have elevated his team at the college level to a winning record.

In Edwards’ case, that didn’t happen. And rightly or wrongly, it makes me think a little about Markeille Fultz, who led a sub-.500 team at Washington.

But the Wolves have a hole to fill at the “big guard” spot, and Edwards might be a nice addition to your fantasy team.

As for LaMelo Ball, well, he’s got a suspect outside shot, which he shoots just like his brother Lonzo, so you’d have that to deal with. And while he has registered more than his share of steals, he is often caught looking on the defensive end.

And there’s the matter of his father, who has proven a pain of the ass in the recent past.

What is the T-Wolves’ priority? Is it to put together some team chemistry, or to be part of LaMelo’s reality show (catch it on Facebook Watch)?

The tough thing about James Wiseman is that he had only three games of college basketball because of eligibility issues. Of course, that’s three more than LaMelo has. But leave that aside for a minute.

From what I’ve seen of Wiseman, he is a very athletic seven-footer. And he may be in a position to contribute much sooner on the defensive end. He can even shoot a little. And I’m not sure that Karl-Anthony Towns wants to be restricted to playing center, so this may relieve him of that.

And having those two alongside each other would be awkward for many opponents to deal with. Sam Mitchell, a long-time fan favorite who has been both a player and a coach for the Minnesota franchise, is an advocate for drafting Wiseman, because it would force opposing teams to “play big” against them, and fewer and fewer teams are all that comfortable doing it. With Wiseman’s ability to get up and down the floor, that is suddenly a matchup problem for any foe.

If Timberwolves’ management is thinking in any way like Mitchell, you might stand a chance for a pretty good payoff on this prop.

Avail yourself of many, many NBA Draft props at BetOnline, where they have the most imaginative wagering options in the industry…… And that includes Odds Booster, which offers greatly enhanced payouts on pre-selected parlays every day of the week…….. And no matter what deposit option you want to use, they can accommodate you. That includes Bitcoin, so it’s very easy to get an account up and running!