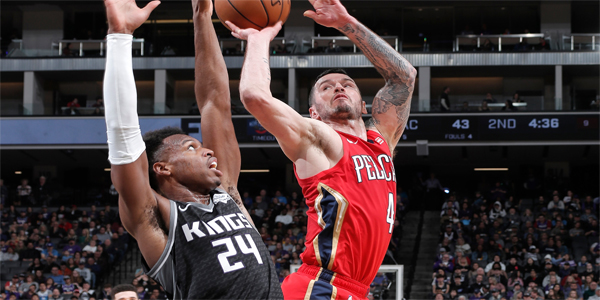 The New Orleans Pelicans would have liked to have been in the NBA playoffs, but that isn’t happening.

The Sacramento Kings preceded them in being eliminated from playoff consideration.

So why is their Tuesday night game the featured contest on TNT?

Because it’s the Zion Williamson Show, that’s why.

Well then, what kind of show is it going to be? BetAnySports customers might be curious about that, and rightfully so.

Perhaps the best way to put it is that it’s kind of like expecting to watch The Tonight Show with Johnny Carson and finding out Johnny went on vacation and McLean Stevenson is the guest host. That is, if you can remember that far back.

We haven’t encountered many situations yet where the teams involved were out of the playoff chase. But here we go. Welcome to the NBA, where they are in a position to shoot themselves very squarely in the foot.

Game time is 9 PM ET at The Arena, which like all these NBA restart games, is located at the ESPN Wide World of Sports complex near Orlando.

The Pelicans (30-40 SU, 35-33-2 ATS) went easy with Williamson in the first two games in the bubble. And they caught some flak for it. In three games in which his activity has stepped up (they sat him down for the back end of a back-to-back against Washington), he has scored 72 points in 74 minutes.

But the fact is, he should have been playing more. Unless it is the kind of injury that would threaten to sideline him, which doesn’t seem to be the case, he should have been the go-to guy for at least 32 minutes per game. He had professed that he was working on a lot of “fundamentals” during the COVID-19 break, but players who carry a lot of weight will have a tendency to put on additional weight during periods of inactivity like this.

If he can’t be on the floor for all that long because he isn’t in the right kind of shape, that is going to be a problem going forward.

New Orleans has scored 7.4 points per 100 possessions more with Zion on the floor than when he is off it. So naturally it is important that he can be out there as much as possible.

And he isn’t going to be out there at all on Tuesday, due to what the team has listed as soreness in his right knee. Jrue Holiday and Brandon Ingram are also reportedly sitting it out.

So if the NBA wasn’t happy with Zion’s 29 total minutes in the first two games, they’re surely apoplectic about this development.

Perhaps BetAnySports patrons’ expectations for the Kings (29-41 SU, 35-33-2 ATS) weren’t much when they went into the bubble, but they have still been downright disappointing. They have just one win since play resumed, and that was a 140-125 romp over these Pelicans. They scored 49 points in the first quarter and then had 40 points in the third quarter as well. The Kings went 16-of-33 from three-point range in that game, committing only eight turnovers. So they had a pretty good recipe for victory.

And they are sitting some people as well. Richaun Holmes missed the last game against Houston with a hip injury, and is expected to sit here. Point guard De’Aaron Fox, who had 30 points in the previous win over New Orleans, has a shoulder injury. He won’t play either, although he may play in the finale. He has averaged 26.2 points and 7.3 assists in the bubble.

Luke Walton told reporters, “These are two more great opportunities for us, so we have to be ready to go and take advantage of this opportunity.”

But we wonder if these players feel differently. Not that they have gone balls-to-the-wall to this point, but now there is nothing left to really play for, and if you’re on a “no-hoper” team, you probably can’t wait to get out of this restricted environment and just go home.

And in a league that sometimes looks like a merry-go-round for coaches, who knows how long Walton or Alvin Gentry (Pelicans) are going to be able to stick around. And is Sacramento GM Vlade Divac so secure?

For my part, I kind of like Walton’s attitude a little better. And there’s less attrition for the Kings to deal with. While the Pelicans have packed it in, Sacramento should be able to riddle them with Bogdan Bogdanovic, who had 35 points in the previous meeting, and won’t be impeded by the likes of Holiday. So it’s the Kings who’ll hold court…. ON the court.

At BetAnySports, you’ll find numerous options with which to wager on the NBA seeding games, all the way through the playoffs….Remember that reduced juice gives you a lot of value, and that Sports Betting Prime enables wagering in real-time, which is very exciting….. Make a deposit using your debit card, credit card, person-to-person transfer or the virtual currency of Bitcoin, which is fast and easy with their automated system, and NEVER incurs a transaction fee!