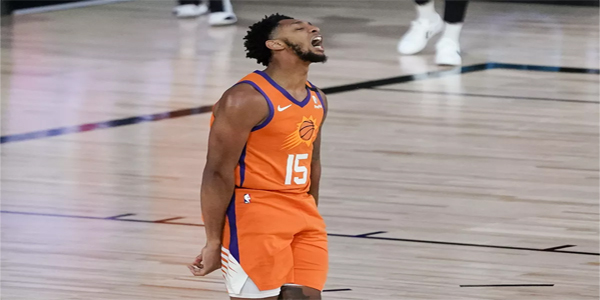 Temperatures are pretty hot outside in the state of Florida. And they are that way inside as well, especially if you are the Phoenix Suns.

Given an opportunity to contest for a playoff spot, literally from the back of the eligible pack in the Western Conference, Monty Williams’ team is sure enough making the most of it.

With a winning streak that has reached four games, the Suns continue their unlikely bid to get into a two-team play-in for the eighth and final playoff spot, and they face, appropriately enough, the Miami Heat. This one is scheduled for 7:30 PM ET on Saturday night at the Visa Athletic Center at the ESPN Wide World of Sports complex.

And if you’re a customer with BetAnySports, you can take advantage of reduced juice to give you more value, along with Sports Betting Prime, which allows for real-time wagering while the event is in progress.

It’s still a little early to talk about who’s going to make the playoffs and who’s going to be left out, because there is a logjam below the Dallas Mavericks, who occupy the seventh spot. But there is little doubt that out of those teams who came into the bubble without a playoff spot assured, Phoenix has been the most impressive.

After a re-opening win over a Washington club that has been severely depleted, the Suns have beaten the Mavericks, Los Angeles Clippers and Indiana Pacers. That makes six wins in their last seven games, going back to March. In the win over Indiana, they had a 21-0 run late in the third quarter to help seal things.

Few could argue that the Suns had building blocks. When you have a center like DeAndre Ayton and a scorer like Devin Booker, you are equipped, at least to some degree. But the acquisition of Ricky Rubio was most certainly a key, as he is the type of playmaker who understands how important it is to get everyone involved.

Rookie Cameron Johnson, who’s been getting full-time minutes over the last three games, has averaged just under 14 points and just over ten rebounds during that time, and against the pacers he had a nifty +36 plus-minus figure, which far outdistanced everybody else.

There are some nice role players. Mikal Bridges is already gaining a reputation as a “glue guy,” able to plug himself into whatever duties Williams asks of him. You may remember big forward Dario Saric as an All-Rookie pick a few seasons ago. Frank Kaminsky is a seven-footer who can stretch defenses by going outside. Folks may remember Jevon Carter as a defensive demon at West Virginia.

And Cameron Payne, who had 13 points for the team the other night, has been valuable in the sense that he has been able to give Rubio a breather at the point guard spot. Payne is a newcomer to the squad, and in 80 minutes of action he’s committed just four turnovers, while the team is at +12.2 points per 100 possessions with him on the floor.

One thing BetAnySports patrons should be impressed with is that Phoenix has done all this winning without three members of the rotation.

Most prominent may be small forward Kelly Oubre (18.7 ppg), who is dealing with a knee injury that has kept him out of action since February 24. He might get cleared to play soon, but will it be soon enough?

We’ll see if center Aron Baynes (knee) and guard Elie Okobo (ankle) get activated here. But we’re not certain of anything yet.

The Heat have split four games, beating Denver and Boston, while losing to Toronto and Milwaukee. So yes, the competition has been elite. even so, the Thursday result, a 130-116 loss to the Bucks, had to be disappointing,

They allowed the East’s #1 seed to shoot almost 53% from the field, including 26 of 41 from inside the arc. Granted, this happened without Jimmy Butler or Goran Dragic in action, and those two, with ankle injuries, might be available here.

As we write this, Phoenix is a tenth-place team, a game and a half behind Portland (9th) and two games behind Memphis (8th). There are three teams right behind them. So all of this has a sense of urgency to it. The Heat’s situation, vis-a-vis seeding, on the other hand, does not call out for a fire alarm, because they will almost certainly be playing Indiana or Philadelphia in the first round.

We’re not going to use any oft-beaten, trite expressions, like how neither of these teams has to “warm up,” or that the heat is “on” or “off.” We’ll just say that we don’t feel the Suns are ready to set just yet. We’ll look for a straight-up victory for this squad that has undeniably started to see the light.