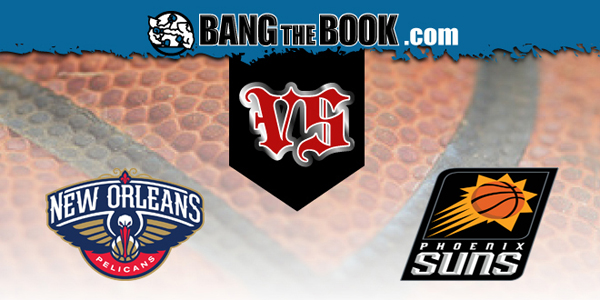 This game at the Phoenix Suns Arena (they haven’t gotten a new naming rights sponsor, I guess) will be seen on TNT, and obviously a major reason for that is the presence of Zio Williamson, who New Orleans took with the #1 pick in the 2019 draft.

What’s different about Zion this season is that they aren’t limiting his minutes as they did as a rookie. First-year coach Stan Van Gundy has had him out there for 35 minutes a game, up from 27 a season ago. And he is carrying averages of 21.7 points and 11.7 rebounds into this one.

New Orleans is going to limit its opponents’ second-shot opportunities. The Pelicans have pulled down 79.3% of available rebounds, which is the best figure in the NBA at the moment.

These guys seem to have the right formula in putting together some superstar-level talent with good, solid supporting players. Brandon Ingram is one of those superstar talents, and he really stood out in the first three games. The Duke product averaged 26.7 points, 7.3 rebounds and 6.7 asissts in the first three games and earned Western Conference Players of the Week honors.

So while Zion is the reason TNT clamors to cover Pelican games, Ingram is the guy who is really taking the lead role for this team. He is adopting the LeBrion James-type role of a forward who acts like a point guard, and everybody is okay with that. And it’s not as if he is not acknowledged for it – he signed a five-year, $158 million extension which makes him one of the highest-paid players in the NBA.

The Pelicans will try to negotiate a Suns team that is now being taken seriously by people. That wil tend to happen when you go into the bubble and win all eight games as they did. That earned Monty Williams “Coach of the Bubble” honors (yes, there was such a thing). And joining the fold this season is Chris Paul, who is there for more than one reason.

Certainly his veteran presence can rub off on the likes of Devin Booker and DeAndre Ayton and Mikal Bridges. But he is also a genuine floor leader who doesn’t have to score to be effective. He erupted for 22 points in a loss to Sacramento but only eight points in the other two games, and he is averaging 9.7 assists.

Paul is also one of those guys who can bring more of a defensive culture to the proceedings. Sure, he’s 35 and has lost a step, but he also has enough savvy to have been voted to nine different NBA All-Defensive teams. Just look – the Suns are fourth in the NBA in Defensive Rating (points allowed per 100 possessions).

And just as importantly for our discussion, they are playing at a much more controlled pace than they did last year, when ranked 10th in the league in that “Pace” category. This year they are 23rd, and that is no accident. Williams, who spent five years coaching the New Orleans franchise, has never had a problem with slowing things down and playing a more deliberate game, and that is the kind of thing Paul can deal with very nicely.

And if I was Van Gundy, I would be looking to play half-court basketball as much as possible, because it has to be hard fro Phoenix to match up physically on defense with Zion. He’s just such a big, agile guy. And then you add Steven Adams up front and you have a team that can beat you down.

As an underdog, I would say New Orleans is “live.” But I also like the UNDER in this ballgame, which won’t be dominated by fast breaks.

No one does basketball like BetAnySports! Enjoy special props on hoops, with reduced juice for better odds, and of course there is a lot of fast and furious action to be had after the opening tip with Sports Betting Prime……. Open an account with your debit or credit card, person-to-person transfers or the virtual currency of Bitcoin, which is fast and easy with their automated system, and NEVER incurs a transaction fee!