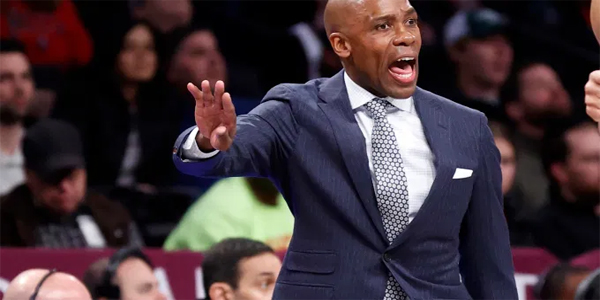 As BetAnySports customers and others get ready to watch the Brooklyn Nets take on the Los Angeles Clippers on Sunday night (9 PM ET at The Arena, on NBA TV), might we be so bold as to extend the following hypothetical:

If they were going to vote for NBA “Coach of the Bubble,” would the name of Jacques Vaughn have to be submitted?

It can be strongly argued that no coach was dealt a worse hand than Vaughn, who actually didn’t know who he was going to have until after he got to the bubble.

We’ve mentioned it before on these pages, but it deserves to be mentioned again: the Nets were already without Kevin Durant, who sat out the season. And Kyrie Irving was ruled out with an injury. For various reasons, the team was also missing the likes of Spencer Dinwiddie, Nic Claxton, Taurean Prince, Michael Beasley, Wilson Chandler and DeAndre Jordan. In other words, they were stripped to the bone.

It was as if Vaughn had to put a whole new team together. And while this was going on, Nets management, which had fired Kenny Atkinson and replaced him with Vaughn on an interim basis, was shopping around for someone to take the job on a more “permanent” basis.

The Nets started the seeding games out in seventh place, just a half-game ahead of the Orlando Magic, and not only did we wonder whether they could even win a game or two, the prospects of staying out of one of those two-game play-in series for the final East playoff spot was almost nil.

So where are we now? The Nets are 3-2 in the seeding games, and not only have they clinched a playoff spot, they may just stay ahead of Orlando and in seventh place. What it amounts to there is the difference between getting throttled by either Milwaukee or Toronto in the first round of the playoffs, but then again, BetAnySports fans know that anything can happen.

One of the Nets’ wins has come at the expense of Milwaukee, which has wrapped up the #1 East seed. And on Friday night they took care of business against the Sacramento Kings, who made made just twelve of 40 triples. Final score: 119-106.

Vaughn knew he did not have many guys who could score in bunches. And that meant Caris LeVert was going to get double-teamed a lot. But instead of going away from Levert, Vaughn tweaked things so that he could get his most potent player into the high post, into more ‘space,” running a slower, more deliberate offense, and that’s been effective. LeVert had 22 against the Kings (he earlier had 34 against Washington), but he was hardly the only guy who contributed.

Joe Harris, a genuine long-range threat, made five triples. Chris Chiozza, a journeyman point guard at best, had a plus-minus figure of +24 off the bench (with 14 points). Tyler Johnson, who was amazingly on the open market as camp began, added 14 more. Rodions Kurucs is offering quality minutes at power forward, and moving into the pivot when the team needs to get “smaller.”

There have been a few names floated for the head coaching job, among them Mark Jackson and Jason Kidd. General manager Sean Marks had said that Vaughn would have an opportunity to make a case for keeping the job beyond the end of this season.

Well, has he done that?

We’re not sure, but we certainly didn’t think we’d be talking “possible letdown” at this stage of the game on the part of the Nets.

This is the back end of a back-to-back for the Clippers. At press time we hadn’t seen the Saturday result against Portland, but they had split the first four games of the restart. If you are coach Doc Rivers, you’re thinking about staying healthy. You know you can’t catch the Lakers, and that whether you’re second or third in the conference isn’t all that meaningful. owner Steve Ballmer did not shell out a lot of cash with the goal of getting past one playoff round, so the Clippers are in it to win it, and to do that they’ll have to beat whoever is in front of them anyway.

They’ve been a little short-handed (Montrezl Harrell has been out of the bubble on a family matter), and what they really care about is getting to the post-season in one piece. It would not surprise us at all to see Brooklyn continue to overachieve in this most unlikely run. A straight-up win for the Nets? Not outside the realm of possibility.

At BetAnySports, you’ll find numerous options with which to wager on the NBA seeding games, all the way through the playoffs….Remember that reduced juice gives you a lot of value, and that Sports Betting Prime enables wagering in real-time, which is very exciting….. Make a deposit using your debit card, credit card, person-to-person transfer or the virtual currency of Bitcoin, which is fast and easy with their automated system, and NEVER incurs a transaction fee!