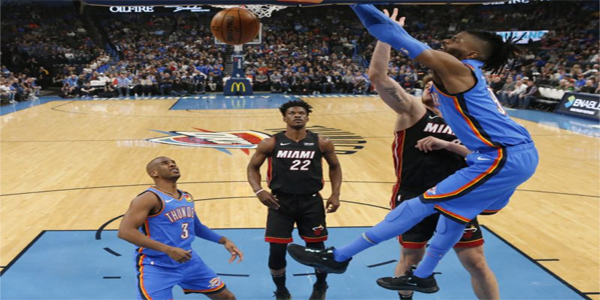 The fact that the Oklahoma City Thunder have been a nice surprise has been widely-discussed. It seems Chris Paul is exerting some veteran influence over yet another team.

BetAnySports customers are still waiting to see who the first-round playoff opponent for OKC is going to be, and perhaps that matter will be cleared up a little more on Wednesday night, as the Thunder clash with the Miami Heat in a game scheduled for 8 PM ET at The VISA Athletic Center near Orlando.

You really do kind of wonder what real difference it makes if a team is seeded third, fourth, fifth or sixth in the West, since they are going to have to beat whoever is ahead of them anyway if they want get to the Finals. That being said, Utah is just a half-game back of them. And if everything ended right now, OKC would face Houston in the first round. With no home court edge in the bubble, however, it doesn’t matter a lot whether you are the higher-seeded team in the West, other than the Lakers’ matchup against whichever team emerges as the #8.

Darius Bazley is getting a real opportunity to show what he can do. The rookie who skipped college in order to train on his own and wound up the 23rd overall selection in the draft has responded by turning in strong games back-to-back, scoring 23 and 22 points, respectively, against Washington and Phoenix. For what it’s worth, the only two rookies for the Thunder who have tallied 20 in consecutive games were James Harden and Russell Westbrook.

Dennis Schroder is back with his team in the bubble, after having left it to be at home for the birth of a child. Because he faces a mandatory quarantine, he won’t be able to play for the Thunder until Game 1 of their first playoff series.

On Monday, playing on the back end of one of those back-to-back situations, OKC got off to a 14-point lead at the end of the first quarter, but got mauled the rest of the way by the Phoenix Suns, who have been on a bit of a rampage in the bubble. In all fairness, the 128-101 defeat came with the minutes being spread out rather liberally by coach Billy Donovan.

On the Heat injury report, BetAnySports patrons can see that reserve forward KZ Okpala is out due to “personal reasons” while Kelly Olynyk is available to play even with his thumb injury. Rookie Kendrick Nunn is “self-isolating” after having left the bubble and then returning, so for the time being the shooting guard is not expected to play, but that could change before game time.

Miami found itself tied at 48 at the half against Indiana on Monday, but then pulled away for a 114-92 win. TJ Warren, who had been tearing everything up for the most part, was held to just 12 points for the Pacers, due in no small part to hounding from defensive stopper Jimmy Butler. Meanwhile, a couple of the young guys were prominent for the Heat off the bench. Tyler Herro had 17 points in 25 minutes, while Derrick Jones Jr. played just 21 minutes and tallied 18 points. They were among seven double-figure scorers on this particular day, and will obviously play a big role in Erik Spoelstra’s rotation once the playoffs begin.

Goran Dragic seems to like his role off the bench, but with Nunn out he stepped in and had 11 points, six rebounds and nine assists. He’d missed the previous game with a sprained ankle. There’s been speculation that he might wind up in a starting role once the post-season begins.

The Thunder are still the NBA’s pointspread leaders at 43-27 ATS, but Boston is nipping at their heels, due to OKC’s 3-3 spread record in the bubble. But Miami hasn’t been a bunch of world-beaters in this setting (3-3 SU), and let’s not forget that they were not sensational when not at the “Triple-A” this season (just 14-19 SU before the break). Both of these teams bring balance, but the Thunder may have a little more in the tank. And with all their comeback wins, they’re very rarely “out of it.”