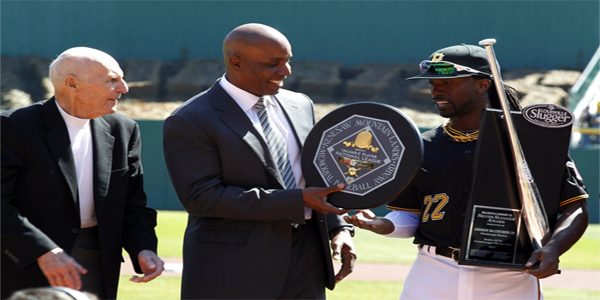 As predictable, to a degree, as the Cy Young voting can be, the MVP voting is a little bit harder to figure out. The one constant is that all of the players that get picked are really, really good, but we don’t necessarily have certain criteria.

When it comes the Cy Young, either 20 wins or 200 strikeouts are a prerequisite. We’ve seen players win the MVP with numbers that are all over the place. They are always good numbers from highly productive players, but some guys hit for a lot of power, while others really don’t. We can’t even point to a .300 batting average being a prerequisite. Guys just have to be really good and have to get a lot of attention for it.

When it comes to the 2020 National League MVP Award, newcomer Mookie Betts could very well spoil the party. The award honestly looks to be really top-heavy with Betts, Ronald Acuna Jr., 2018 MVP Christian Yelich, and reigning MVP Cody Bellinger. It is entirely possible that Yelich would have won another one had he not missed most of September. Yelich could have hit 50 homers and could have won the award in back-to-back years. He would have been the first NL player with back-to-back MVP awards since Albert Pujols in 2008-09.

Still, there are a lot of guys that have a good chance at taking down the award.

For some reason, at time of publish, 5Dimes didn’t have lines up, even though they have them up for the AL MVP and the Cy Young in both leagues.

In order to get this posted, we’ll defer to the BetOnline Sportsbook odds for this one as of February 20, 2020:

This is a fairly limited list of players, but it hits all of the big ones. If there is one prerequisite for winning the MVP, playing on a good team would be it. Most of these guys do or will, so that isn’t that much of a concern. Mike Trout is the only player that regularly wins the MVP on a team with a lackluster record.

With that, we can cut the field down a bit. I don’t think Fernando Tatis Jr. can win it with a Padres team that won’t win a lot of games. He’ll be overshadowed by guys like Betts and Bellinger in the NL West on a better team. That would also eliminate Nolan Arenado, Ketel Marte, Manny Machado, and Trevor Story. We can also knock off the two pitchers. Clayton Kershaw in 2014 was the first pitcher to win the award since 1968.

As great as Ronald Acuna is, he probably strikes out a little too much to have enough chances to put up extra-base hits and high slugging numbers. His .552 SLG in 2018 would have been the lowest outside of Andrew McCutchen in 2013 and Buster Posey in 2012 since Jimmy Rollins in 2007. Given the power bats in the league, I don’t think his numbers will stand up.

Juan Soto may not have the SLG either, but if he truly posts an OBP over .400 like the projection systems suggest, that might be enough to give him a look at 12/1. He’s probably my favorite price in the mid-range once you get past the top four guys. I think it will be hard for Bellinger not to get serious consideration for another one and +850 is a pretty decent price.

In fact, Bellinger is my pick to win it. He cut his K% down from 23.9% to 16.4%. What happened with that is he was able to post a higher SLG with more balls in play and his BB% also increased from 10.9% to 14.4% to increase his OBP from .343 to .406. Those look like two sustainable developments, not to mention he plays for the best team in the NL and also stole 15 bases while playing very good defense.

I think we’re looking at our first repeat winner since 2008-09 with Bellinger edging out his new teammate in Betts and the 2019 runner-up in Yelich.