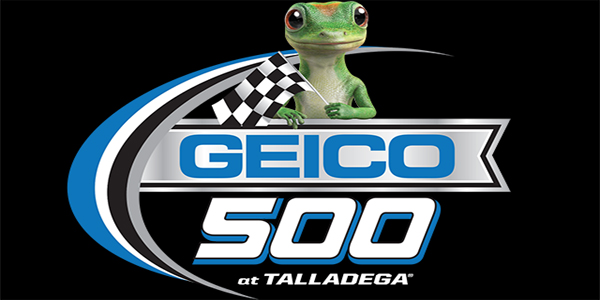 Some sporting events inherently have more gamble to them than others. Take races at Talladega Superspeedway for example. The NASCAR Cup Series is at the 2.66-mile track this week for the GEICO 500. Hopefully the teams are able to save a bunch of money on their car insurance because The Big One is inevitable and it will take out some of the top contenders to win the race.

If NASCAR wanted more drama and excitement, it has happened. Through nine races, we’ve had eight different winners and some very interesting finishes. We’ll see what Talladega has in store, because it always delivers in one way or another.

Odds come from MyBookie Sportsbook for the GEICO 500 and we’ll give you some idea of how to handicap this race along the way.

As we look at the odds for the race, we see that snakebitten Denny Hamlin is the favorite. Nobody is crying for Hamlin, who is far and away this year’s leader in points, but he led the most laps and won the first two stages last week, only to finish second. Hamlin now has eight top-five finishes this season, but has not won a race.

Hamlin’s price at +700 illustrates the openness of this race because a crash is invariably going to take out a big chunk of the field. Joey Logano is the second favorite at +900. He runs extremely well on plate tracks and has three career wins here. Brad Keselowski, whose five wins are the most among active drivers, and Chase Elliott are both +1000.

Talladega, more affectionately known as ‘Dega, is a 2.66-mile superspeedway asphalt track. There are a lot of wrecks here, despite the big racing surface because the cars can get bunched up with the engine modifications made in the name of safety and also with the high speeds achievable on the straightaways.

BET NASCAR AT MYBOOKIE SPORTSBOOK WITH A WELCOME BONUS

Some guys like the plate racing format. Others do not. It is all in the eye of the beholder. There are some drivers that do really well here and others that do not. Keselowski is one that has done very well with five wins at Talladega. A lot of drivers have big sample sizes here because this is a twice-a-year stop for the Cup Series.

Keselowski’s five wins have come over just 24 starts. Guys like Kevin Harvick and Kurt Busch have 40 career starts at Talladega. Logano has his three wins in 24 starts. Logano’s eight career top-five finishes at Dega trail only Hamlin’s nine among active drivers. Logano’s 397 laps led are the most among drivers.

Ryan Blaney, Hamlin, and Jamie McMurray are the only other active multiple winners here. Blaney actually has two wins in just 13 starts, including the win in this race last year.

Over the last 10 races, Logano, Blaney, and Keselowski have six of them. Aric Almirola has another. Fords have done very well on this track and 321 of Logano’s 397 career leading laps have come in the last 10.

Elliott has been one of the few non-Ford drivers to run really well here with a win and a few top-five finishes. He only has six lead lap finishes, but he’s been in the top five in five of those six races.

That’s why Elliott is the only non-Ford I’d be taking a look at for this week. Ryan Blaney is on the card for me. Blaney has had a very inconsistent season, but with a win under his belt and a strong history here, he can afford to be a little more aggressive. That’s why guys like Logano and Elliott run well on plate tracks. They are aggressive. If you drive tentative, you get caught in the middle of the pack. If you make your own breaks, it seems to work out favorably.

GET A WELCOME BONUS + A FREE FUTURES BET AT MYBOOKIE SPORTSBOOK