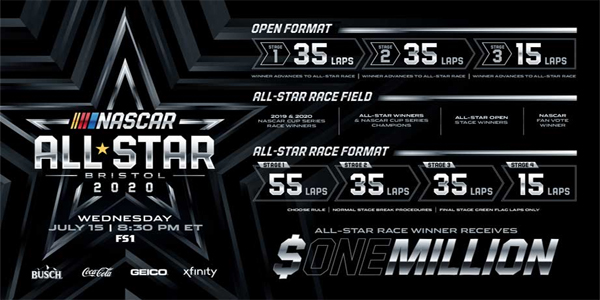 If you had Cole Custer in last week’s Quaker State 400 and would like to pass along the lottery numbers for tonight, I would greatly appreciate it. It was not a good day for the drivers without a win because Custer now has a playoff spot unless he falls outside of the top 30 in points.

We won’t anticipate any more surprises like that the rest of the year, but you never know with two more Daytona stops and two Dover stops in between. In any event, the Cup Series takes a break from all of the stress of running for points with this week’s NASCAR All-Star Race at Bristol Motor Speedway.

The drivers still have a regular Cup Series race on Sunday in Texas, but the All-Star Race on Wednesday night will at least give them the opportunity to catch a small breather. Furthermore, it will allow them to race in front of fans for the first time since early March.

Odds are posted across the market for the All-Star Race, but we’ll pull ours from 5Dimes Sportsbook:

Martin Truex Jr. will start on the pole and is the fourth choice behind Kevin Harvick, Kyle Busch, and Denny Hamlin, which is basically how the odds board has looked every week since the return.

One million dollars is at stake for the winner in this race, which will be on Wednesday night at 8:30 p.m. ET on FS1.

This is obviously different from a regular Cup Series race. There are four stages in this race. Stage 1 is 55 laps. Stages 2 and 3 are 35 laps. Stage 4 is 15 laps. The final stage must be green flag laps only.

In order to make things more exciting at The Colosseum, NASCAR officials have instituted the “Choose Rule”. The Choose Rule states that drivers must commit to an inside lane or an outside lane on restarts. Usually that option only exists for the race leader. In this race, it applies to all the drivers. If you don’t make a clear choice or you change lanes, you wind up at the back of the field.

In a shorter race like this one, which will only be 140 laps on the .533-mile Thunder Valley track, that would pretty much be the end of your day barring a big wreck or something to that effect.

Obviously this is a really unique setup and format. There are some different rules in place to add some excitement. There is just a lot going on in general. The last five winners in an All-Star Race are Denny Hamlin, Joey Logano, Kyle Busch, Kevin Harvick, and Kyle Larson, but those were all wins at Charlotte Motor Speedway. Now we’re on the short track at Bristol.

For what it’s worth, Kyle Busch has eight career wins at Bristol and 13 total top-five finishes in 30 races. Only Matt Kenseth has more top-five finishes at Bristol with 37, but he and Jimmie Johnson have run seven more races than Kyle at Bristol. Kyle’s brother, Kurt, has 12 and is tied with Kevin Harvick in that department.

Do past results at the track matter in this All-Star Race contest? It is hard to say. They’re racing for money, not points, but they also have a race four days later in Texas, so a wrecked car means a lot of work and that will be a fine line to walk.

I think this is part crapshoot, part driver on a short track. When you think about all of the active NASCAR drivers, only eight of them have a win at Bristol. Busch x2, Kenseth, Keselowski, Johnson, Harvick, Hamlin, and Logano.

We’re talking about a lot of cold, hard cash for winning this race, so all of the drivers will be out there in search of a victory. The most wins in the All-Star Race format belong to Jimmie Johnson with four. Given that he is said to be retiring after the season, would it be that much of a surprise if the drivers pushed him to the front of the field? He is +3300 to win the All-Star Race and it would be a fitting moment.

Johnson’s last win in an All-Star Race came back in 2013 and he hasn’t won a race since Dover in 2017. It seems unlikely that he’ll win a points race this season. I’m not going to call this collusion. Let’s call it a gesture.

BET ON JIMMIE JOHNSON TO WIN THE NASCAR ALL-STAR RACE

Otherwise, it would be pretty fitting for Kyle Busch to win here since he can’t win a points race. He’s +590 and that is a decent value for a guy that typically runs very well here.