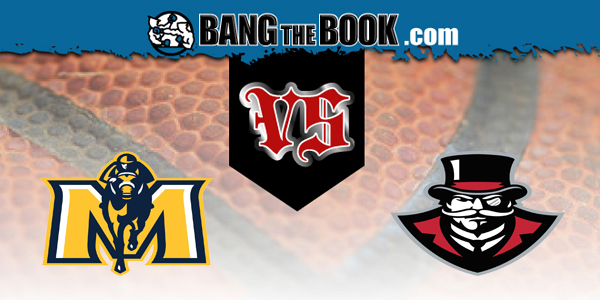 There aren’t a lot of headline-grabbing programs in play on Monday around the college basketball world, but there are some intriguing and interesting games on the slate. One such game takes place in the Ohio Valley Conference between Murray State and Austin Peay.

The Racers are -3 on the road with a total of 145 at BetOnline Sportsbook in a game that you can find this evening on ESPNU with an 8 p.m. ET tip-off.

It is worth pointing out that these two OVC hopefuls played once already in Murray, Kentucky and the Racers rolled to an 87-57 win. They closed -3 in that game and won by 30, but they opened -4 here and the line was bet down to -3.

We’ll look at both sides of this handicap and try to find a play on either side or total for this excellent OVC matchup.

Murray State couldn’t miss in the first meeting. The Racers were 26-of-37 from two-point range in the first game and 8-of-20 from three-point range. The game was only played to 65 possessions, but Murray State scored 87 points with 1.335 points per possession, a number that they have only been close to in games against lower-division schools otherwise.

Most of last season’s team that went 23-9 is back for Murray State, so big things are expected and the team is likely to contend with Belmont for the top spot in the conference like usual. The Racers, though, are just 2-2 against Division I competition on the season. They’ve blown out Greenville and Transylvania, but have lost to Middle Tennessee State and Southern Illinois. The wins are against Illinois State and Austin Peay.

Turnovers have been a huge issue in the two losses. The Racers had 18 turnovers in each loss and those are the only games that Matt McMahon’s team has been held under a point per possession.

In all five games against Division I competition, the Governors have scored less than one point per possession. Just about everybody of consequence from last season is back, but APSU has really struggled to defend thus far. That was also the team’s problem last season en route to a 21-12 record.

The Governors were 316th in eFG% defense last season and 313th in 3P% against. The song remains the same this season and the offense hasn’t been good enough to overcome it. The Governors have also turned the ball over in more than 24% of their possessions on the year. Austin Peay had 17 turnovers to 11 for Murray State in the first meeting.

That could be a major problem as the season goes along for the Governors. They struggle badly on the defensive side and giving the opposition extra possessions makes the struggle that much worse.

This is a tough handicap. The game was only played to 65 possessions last time because of the score. Otherwise, it is the slowest game of the season for both teams. Perhaps that is why the total has been bumped up. Austin Peay is a terrible defensive team, but they’ve had lots of issues offensively as well.

From a side standpoint, it is probably a bit surprising to see Murray State win the first game by 30 and not really increase that much as a favorite. The venue is flipped, but with marginal home court advantage this season because fans are not in attendance, this line isn’t adjusted all that much.

It is important to respect the early money, that would seemingly have no reason to be on Austin Peay, but it is. The Governors have had issues on the defensive glass over their last three games as well.

I’ll respect that money, but look to the over here, as this game should be played to a higher pace as the previous one and both teams should get into the mid-to-upper 70s.