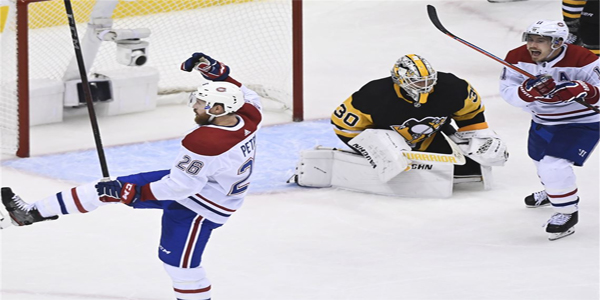 The Montreal Canadiens entered the bubble in Toronto as a big underdog against the Pittsburgh Penguins. After drawing first blood in the series, the Habs have gone from nearly $2 underdog to pretty close to a pick ‘em to advance in the 12 vs. 5 series in the Eastern Conference.

A win in Game 2 on Monday night would push them to the brink of advancing, as these opening series are a best-of-five format. They face another uphill climb per the betting odds, with Pittsburgh lined as -170 favorite at BetDSI Sportsbook. The comeback is +150 on the Canadiens, who were a slightly smaller underdog in Game 1.

Pittsburgh had a chance to win in regulation on a Conor Sheary penalty shot, but Carey Price was equal to the task for one of his 39 saves. Everybody said in the lead-up to this series that Price would have to be the equalizer and he was, but many underappreciated how Montreal performed during the regular season, particularly in expected goals for at even strength.

Pittsburgh was the better defensive team and the better team on the power play and penalty kill. The Canadiens did not get a whole lot of good performances from Price during the regular season, but got one in Game 1 and will need another one in order to take a 2-0 series lead.

It was really a game of missed opportunities for the Penguins. Along with the penalty shot, they failed to score on a two-man advantage early in the third period that lasted 1:32. They were clearly the quicker team, as the Canadiens had several obstruction minors. The Penguins had seven power play chances and only scored on one of them.

But, in the playoffs, whether the series are seven games or five games, goaltending can be the equalizer and it was for the Habs in Game 1. Now that we’ve seen a game, we have a slight price increase on Pittsburgh and that makes a lot of sense. Matt Murray wasn’t bad, but he also wasn’t good enough. He’ll have to improve in Game 2 and the Penguins will have to do a better job of clearing out the front of the net.

In all actuality, both teams will. Given how much Montreal was shorthanded, the fact that they were even close to the Penguins in shots and scoring chances is a testament to how well their offense did in terms of generating quality chances. They also weren’t very good at burying those in the regular season.

While the Penguins should win Game 2 and the price increase to -170 is justified, the over 5.5 at +105 is the play for Monday night’s matchup. Both teams had some quality looks. The Penguins were fast and the Canadiens had a hard time keeping up. Montreal generated enough chances of their own, particularly without the power play opportunities, to be dangerous. We should also see Price regress a little bit and Murray looked uncomfortable at times in the first game.

GAMBLE ON GOALS IN GAME 2 CANADIENS VS. PENGUINS