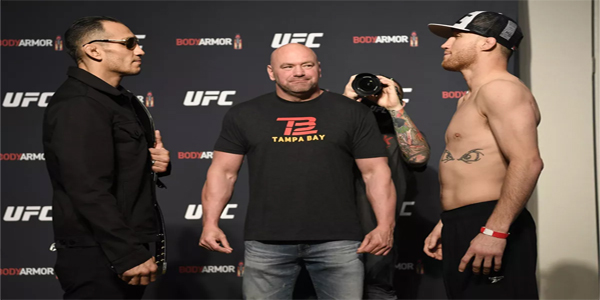 Dana White caught a lot of abuse from the mainstream media when he wanted to “open things up” in the UFC, no matter what it took. He was ready to go on tribal land, but got turned back in that pursuit when top executives at Disney made him put on the brakes.

We still think he is going to go to a “Fight Island” like he’s pledged. But for now, he’s going top take the organization into friendly territory – Florida, where Governor Ron DeSantis has been very anxious to get closer to normal and welcome sports back into the fold. So BetAnySports customers can watch UFC 249 on Saturday at the VyStar Veterans Memorial Arena in Jacksonville. And they will be able to wager on two more events at the same location in the next ten days.

There is a bout with some intrigue to kick things off as the main event. Since lightweight titleholder Khabib Nurmagomedov has been unable to fulfill his championship duties because of travel restrictions. So White is putting #1 lightweight contender Tony Ferguson against knockout artist Justin Gaethje for what is being billed as the “interim title.”

There are a few things about Ferguson’s story that make it intriguing. For one thing, he’s had hard luck in the sense that he has been slated to fight Khabib on five different occasions, with each of those opportunities falling through. It wasn’t all Khabib’s fault; on two of those occasions, Ferguson suffered an injury that prevented him from participating.

If he can win on Saturday night, he is certainly going to force the issue, and you’ll see yet another fight with Khabib scheduled.

In the MMA betting odds on this main event as they are posted at BetAnySports, Ferguson, who in addition to being the #1 contender is also the UFC’s #10 pound-for-pound fighter, is the favorite:

I have to apologize that I am looking at this as someone who is from a boxing culture, and not an expert in the martial arts. Still, there are, I think, some things that apply to MMA just the way they do to boxing.

For example, similar to the way we see boxer-punchers as people who can win in different ways, such a thing might apply to Ferguson, who has shown remarkable balance on his ledger, with twelve of his wins by knockout and eight by submission (five also came by decision).

Another familiar boxing expression is that “styles make fights.” And it applies here. Gaethje has only two wins by submission, and despite the fact that he achieved All-America status as a wrestler in college (Northern Colorado), he is not nearly as adept in going to the ground as he is in the stand-up game. And he’s pretty good at it. Meanwhile, one can expect that Ferguson, the jiu-jitsu master, might want to take things to the floor. So that will be a significant tug-of-war right there.

And this fight may well be decided by who can impose his will upon the other. Of course, because Ferguson can stand up and strike, it would be more difficult for Gaethje to make Ferguson “fight his fight.”

There’s another thing that is very real in boxing, which is that some guys are very quick starters, while other guys are either slow starters are simply don’t start well. Gaethje is expected to come out of the gate very fast, and throw bombs early. There’s not a lot of disagreement in that, as the Arizona native finds a big advantage in unleashing a barrage before opponents get to settle in.

It seems the general consensus is that Ferguson is a guy who would be well-served by having a longer bout, and that he has a tendency to get hit a lot early. So that part of the matchup doesn’t work out all that well for him.

But IF he gets by that, and can force this thing to the ground, he could take care of business very quickly too, because Gaethje may not be all that well-prepared or well-equipped to navigate his way out of trouble.

Accordingly, I’m not sure we are looking at something that will go more than seven and a half minutes.

So rather than go with either man, I would side with the UNDER, even at the price of -155.

You can go all-out in betting UFC 249 at BetAnySports, where you get better odds and flexibility in opening up an account. You can use your debit or credit card. You can use person-to-person transfers. And you can use the virtual currency of Bitcoin, which is fast and easy with their automated system, and NEVER incurs a transaction fee…….. When you get there, check out the virtual plethora of simulated sports, as well as Sports Betting Prime for real-time wagers…….. And you have five different, great casino options, including a couple of them with live dealers!