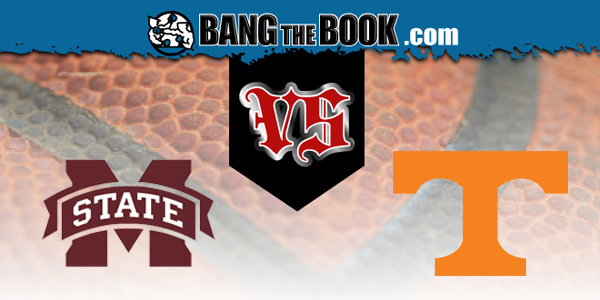 If only they were all that easy. We went against the grain of a line move on Monday and the Arizona Wildcats rewarded us with a 13-point win after closing just a 4.5-point favorite. We didn’t get the best of the number, as the line kept moving down, but we cashed the ticket and didn’t even break a sweat.

So nice, let’s hope we can do it twice with another spotlight pick for Tuesday night.

With a much bigger card, there are a lot of games to choose from, but I’ve got my sights set on the matchup between Mississippi State and Tennessee. It isn’t an off-the-beaten-path game like I usually find, but I’ve got an angle I really like in this one and it’s about making dollar, dollar bills, y’all.

Tennessee is favored by 9.5 with a total of 128.5 at Bovada Sportsbook. This line is a-movin’, both with Mississippi State on the side and the total on the under. That means we should hurry up with the write-up and get to the pick.

Mississippi State has a respectable 9-7 record with a 4-4 mark in SEC play on the season. Ben Howland’s bunch is also 9-7 against the spread and 9-7 to the over. Guess 9-7 is a popular number for this team.

The Bulldogs ride a two-game skid into this one, as they were rolled by in-state rival Ole Miss and then lost a track meet to Alabama. They did cover the number against the Tide, but playing a game to 74 possessions is not at all what Mississippi State wants to do. They won’t have to worry about that in this one.

The Bulldogs are shooting 36.8% from three-point range, which is great, but they also rank 343rd in 3P Rate at 25.8%. They take very few threes, but instead opt for long two-point shots, which is a –EV proposition offensively. The Bulldogs have taken a “Farther Two” as defined by Bart Torvik on 41.4% of their shots. That ranks 339th in the nation because long twos are a bad idea.

They are low-percentage shots that aren’t as valuable as taking threes. At the college basketball analytics website Haslametrics, Mississippi State is one of two teams in the top 200 with over 40% of their field goal attempts vs. the average D-I opponent from the mid-range. That sounds like a mouthful, but to simplify, Mississippi State takes a lot of bad shots. They are fifth in highest percentage of mid-range attempts. The ROI on these shots just isn’t there.

They don’t even really make them, shooting 33.3% on “Farther Twos” per Torvik. The only saving grace for Mississippi State offensively is that they are one of the best rebounding teams in the nation. They are seventh in ORB%, so they get second-chance points on those misses.

The chickens have come to roost for the Tennessee Volunteers over the last couple of games. They, too, take too many of those mid-range shots and it has been a contributing factor into how they’ve scored 113 poinst in the last two games against Florida and Missouri. Over the last two games, Tennessee is 26-of-66 on two-point attempts and 12-of-40 from deep.

This had been an efficient offensive most of the season, especially in non-conference play, but SEC play has been very inconsistent. After all, this is a Tennessee team that rolled Missouri by 20 in the conference opener on December 30 and just lost by nine at home in the rematch.

The Vols are still a top-50 offense in adjusted efficiency and are also top 50 in TO% and FT Rate. They are just outside the top 50 in ORB%. It is a defense-first team, though. Rick Barnes’s bunch ranks third in adjusted defensive efficiency. They are 12th in TO% on defense and fourth in Block%. They protect the rim well and pack in on defense. That will force Mississippi State into that low-percentage mid-range game to an even higher degree. Tennessee has also defended the three-point well, as opponents are shooting 31.2% on triple tries.

Tennessee doesn’t take a lot of threes and they’re in the top 50 in mid-range attempt percentage, though it would be better to call that the “bottom 50” because of the nature of that shot. In contrast to Mississippi State, though, Tennessee is shooting 39.3% on “Far Twos”.

Mississippi State ranks 307th in adjusted tempo per Bart Torvik. Tennessee ranks 296th. This is a game that probably falls somewhere around 65 or 66 possessions. The move down on the total from 130.5 to 128.5 makes a lot of sense, especially if you pay attention to the shot selection for both teams. Neither team bombs away from three-point range. Both teams settle for a lot of mid-range jumpers.

Tennessee’s athleticism should help limit Mississippi State’s second-chance opportunities on putbacks. Similarly, Tennessee probably won’t get many of their own.

This looks like a stone cold under play. We’ve lost a couple of points of line value, but I think it’s still worth taking.