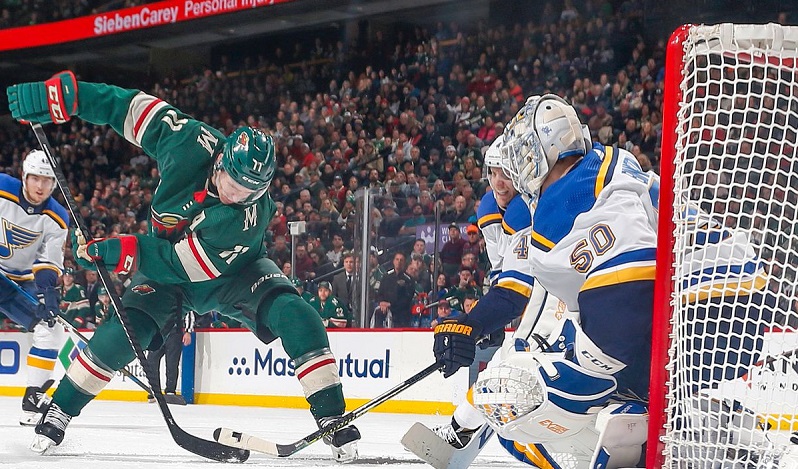 The Minnesota Wild and the St. Louis Blues have both clinched playoff spots. The Blues sit 16 points behind Minnesota, but the top of the West Division has been so strong and the bottom has been so weak that the Blues got into the playoffs as the #4 seed in the division by being the best of the rest.

Minnesota heads into action on Wednesday with a very slim chance at moving up into the #2 spot. It would take two losses from Colorado against the Los Angeles Kings and two wins against the St. Louis Blues. As unlikely as it seems, this puck drop is prior to Colorado’s against the Kings, so the Wild won’t know whether or not their hopes have been dashed.

A lot of teams that are looking ahead to the playoffs have been resting people. Minnesota may do the same. Right now, oddsmakers have the Wild as a short road favorite against the Blues in the Arch City with a price of -130 at Bovada Sportsbook with a total of 6.

The Wild have two games left, so they should be able to rotate their goaltenders to get each guy one final tune-up heading into the postseason. The first opportunity on Wednesday will go to Cam Talbot. Talbot is 18-7-5 with a 2.59 GAA and a .916 SV%. That means we should see backup Kaapo Kahkonen on Thursday.

Minnesota has been a pretty stout defensive team on the season and has found a lot more scoring punch than what we’ve seen in previous seasons from the Wild. What’s so interesting about the scoring uptick for the Wild is that their power play percentage ranks near the bottom of the group of playoff teams at just 17.95%. We could be generous and round up to 18% there and it would still be one of the worst numbers of the 16 postseason teams.

Minnesota’s 123 goals at 5-v-5 are among the most in the NHL, though. A lot of playoff games are determined by special teams because the teams are usually pretty evenly-matched at 5-v-5, but the Wild have been so proficient scoring in the most common game state that it could end up being a really big positive for them. Of course a big part of the concern for the Wild is that Vegas has the most 5-v-5 goals and Colorado is up there as well.

But, playing against the Blues, Minnesota’s 5-v-5 prowess could be a really big asset. St. Louis is -12 in goal differential at 5-v-5, whereas Minnesota is +23. The Blues have been badly outchanced at 5-v-5. Minnesota has been one of the stronger teams in terms of scoring chances and also high-danger chances.

You have to wonder how the Blues handle these last two games. Jordan Binnington has been locked into a nice groove, so the Blues certainly don’t want him to run the risk of getting rusty. On the other hand, they’ve had to play a grueling and brutal schedule down the stretch just to get into the playoffs. They squandered too many chances early in the season against the softer part of their schedule and have had to play teams like Colorado, Vegas, and Minnesota a lot late in the season.

Here is another game against Minnesota for the Blues. As mentioned, St. Louis is really facing some severe deficiencies at 5-v-5 in this game. That will be the case in the playoffs irrespective of which team they end up playing in that first round series.

The Blues have scored 33 power play goals this season and have one of the better success rates in the NHL at 22.6%, but they’ve given up 37 goals while shorthanded. The more you dig into the Blues’ numbers, the more you start to realize why they are a team that had to scratch and claw to get into the playoffs. The North Division teams aren’t great, but there is a reason why the Blues have one of the lowest point totals of the 16 teams going to the playoffs.

All of the metrics, the advanced metrics and the traditional metrics, paint a picture of a Blues team that is making the playoffs for one reason and one reason only – the strength of the bottom of the West Division.

The question here becomes who actually plays for Minnesota. Do the Wild try to steal some rest with such long odds to pass the Avalanche? The fact is that Colorado will be a $3 or more favorite in both games against the Kings. Isn’t this a great chance to give some players a blow before what will undoubtedly be a very hard first-round series? Will that be enough to tip the scales in St. Louis’s favor?

Personally, I don’t think so. I’d look for the Wild to take care of their affairs here. St. Louis has played a lot of high-pressure games to get to this point. They’re trying to steal some rest themselves.