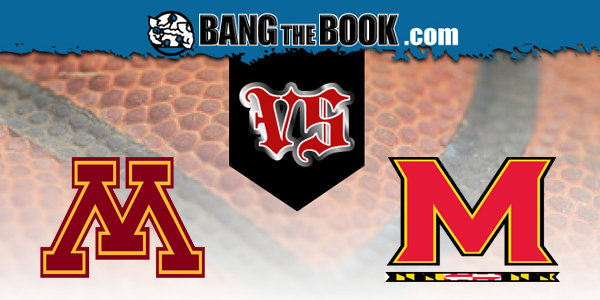 We were on the wrong end on Saturday down in the Southland Conference, but Sunday is a new day and we’re still looking at 4-2 week on the spotlight games heading into the last day of the weekend.

Options are limited tonight, but it will be the Big Ten battle in College Park between Minnesota and Maryland that draws the head billing on February 14. Maryland is -3 at Bovada Sportsbook with a total of 138 for this 7 p.m. ET tip-off. Follow this one on your phone while you take that special someone out for a nice Valentine’s Day dinner or prepare that special meal at home.

Opponents are shooting 44% from three and 56% from two. That would certainly be the recipe for going 0-6 on the road. Up until the February 4 game against Rutgers, Minnesota wasn’t even playing close games. They had losses by 27, 12, 25, 15, and 19 in their first five road tries. Rutgers won 76-72 in the most recent one.

This will be the worst opponent Minnesota has played on the road. We all know that the Big Ten is an excellent college basketball conference and the previous six opponents for Minnesota were all top-25 caliber teams per all the rankings websites. Maryland is outside the top 50.

In seven conference home games, Minnesota is 6-1. They still aren’t shooting overly well, but far superior to what they’ve done on the road. They’re also playing much better defense at Williams Arena, affectionately known as “The Barn” in Minneapolis. Ironically, their only loss at home came against Maryland in a game where the Gophers were 14-of-46 from the floor. They scored 49 points and 16 came at the free throw line. So, we’ve got a revenge spot here for Minnesota. They’re going to have to get one of these elusive road wins somewhere, right?

The Terps got 36 of their 63 points in that first win over Minnesota from Donta Scott and Eric Ayala. That has been the case pretty much all season long. Aaron Wiggins has played a lot and taken the most shots, but it has been Scott and Ayala that have been the best shooters for Maryland. Scott is shooting 58.8% on twos and 45.8% on threes. Ayala is a 56.8% shooter on deuces and a 34% shooter on treys.

The Terps are only 4-9 in conference play, but do have a road win over Wisconsin to go along with a road win over Illinois. If that doesn’t show the upside and potential of this team, I’m not sure what would. It is a matter of consistency from Mark Turgeon’s team. Like most Big Ten teams, Maryland has a low TO% on defense, but that is one of just two glaring flaws for this team. The Terps also don’t rebound well offensively, but they rebound well on defense, so it isn’t really a height or athleticism issue. In conference play, the Terrapins are only getting back 18.1% of their misses. That ranks 13th in league play. They are fourth in ORB% against, though.

Maryland has played poorly on defense at home in conference action thus far. They are 14th in league play in eFG% against in home games at 55.9%. Opponents are firing away at over 39% from three and over 54% on twos. The only home win for Maryland came against Purdue by a point in a game that was played to just 61 possessions.

The first game between these two teams played to just 63 possessions and only 112 points, despite 54 combined free throw attempts. It was a really ugly, awful, atrocious game. These are two teams that are highly inconsistent, partially based on where they are playing, but also because there aren’t a lot of bench contributions and secondary scorers. There is a lot of pressure on the best guys to be the best.

I think Minnesota gets that first road win here, but rather than take the +3 with them, I’m looking at the under 138. There shouldn’t be a ton of second-chance opportunities in this game and I don’t see either team suddenly shooting out the lights. Minnesota moves at a quicker pace, but they’ve played some slow games on the road in conference and basically just surrender to the pace of the opposition.