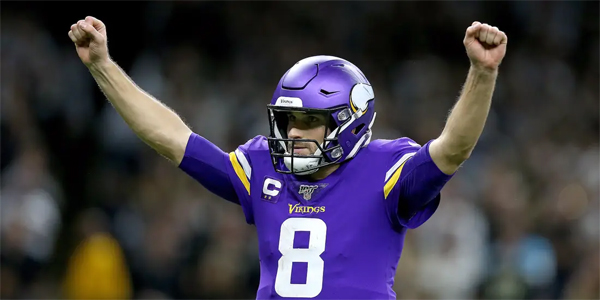 Only a few inter-conference games will take place in Week 6 in the NFL on Sunday, October 16, but this one in Miami is rather interesting, and here you can take a look at the best Vikings vs. Dolphins betting pick and odds.

Minnesota is searching for the fourth consecutive victory when they take on Miami at Hard Rock Stadium. The Vikings are 3-point favorites on BetDSI Sportsbook, while the total is set at 45.5 points. These inter-conference rivals will meet for the first time since 2018.

Vikings beat the Bears at home

Kirk Cousins completed 32 of 41 passes for 296 yards, one touchdown, and one interception in a 29-22 victory. Justin Jefferson had another monster performance as he posted 154 yards on 12 receptions, but Jalen Reagor was the one to score a receiving TD, and it was his only catch of the game for one yard. Dalvin Cook was quite efficient on the ground with a game-high 94 yards and two touchdowns on 18 carries. Minnesota had three defenders with seven tackles: Cameron Dantzler Sr, Eric Kendricks, and Jordan Hicks.

Dolphins were crushed by the Jets in New York

The Miami Dolphins (3-2, 3-2 ATS) suffered their biggest defeat of the season as they were dismantled by the New York Jets 40-17 on the road. It was evident that it was going to be a long game for the Dolphins from the very start; they allowed a safety early on and trailed by 12 in the second quarter. Although Miami bounced back and cut the deficit to two, the Jets scored three unanswered touchdowns in the final 15 minutes to secure a massive W.

Skylar Thompson completed 19 of 33 passes for 166 yards and one interception. He entered the game for Teddy Bridgewater, who suffered a concussion in the first offensive play. With the pass offense limited in this one, the Dolphins used their runners a lot. Raheem Mostert led all the runners with 113 yards and a touchdown on 18 carries, while Tyreek Hill had seven receptions for 47 yards. On defense, Brandon Jones led the Dolphins with nine tackles.

Without Tua Tagovailoa and Teddy Bridgewater under the center, Miami will have to rely on its runners rather than forcing passes through Skylar Thompson, who is getting his first career start. Although the Dolphins have the fifth-best pass offense in the league, it changed when Tagovailoa suffered a head injury. Miami is averaging just 82.8 rushing yards per game, so the Vikings will be ready for them, knowing the hosts will use the run offense more. Raheem Mostert did impress in the last game, but the Vikings have more offensive weapons at their disposal and stronger defense, so I think the visitors will get the fourth consecutive win.

After impressing offensively in the opening three games of the season, Miami scored just 32 points in the last two. Minnesota’s offense is better and better, scoring 28+ points in each of the previous three games, but the Vikings’ defense, which is allowing 20.4 ppg and it’s 15th in the NFL, conceded 22+ in each of the last four games. Even though I think Miami will struggle offensively, the hosts should contribute enough to take this game Over. Over is 10-3 in the Vikings’ last 13 games overall; Over is 10-3 in Minnesota’s previous 13 road games, while Over is 11-4 in the Dolphins’ last 15 games following an ATS loss.