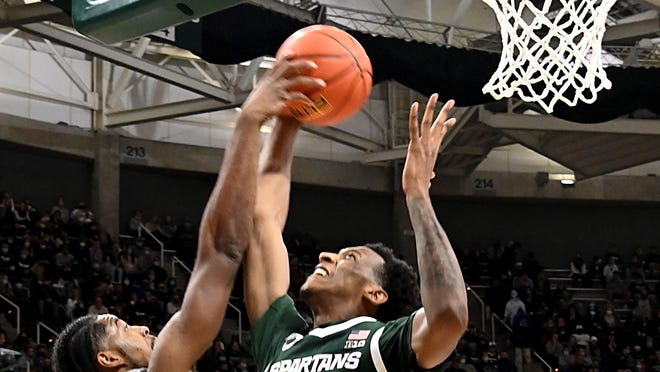 The 2021-22 CBB season continues Wednesday, November 17, with plenty of interesting non-conference action around the country, so we’re taking a closer look at the marquee showdown from Hinkle Fieldhouse in Indianapolis to get you the best Michigan State vs. Butler betting pick and odds.

The Spartans meet the Bulldogs for the first time since 2010 when Butler outlasted Michigan State 52-50 to clinch the NCAA final berth. This time around, Michigan State is a small 2.5-point road fave, while the totals sit at 131.0 points on BetOnline Sportsbook.

Michigan State bounced back from an opening loss

The Michigan State Spartans (1-1; 1-1 ATS) got smashed by the No. 3 Kansas Jayhawks in the opening game of the season, 87-74, failing to cover a 4.5-point spread, so they were fired up last Friday when they trounced Western Michigan as 24.5-point home favorites, 90-46.

The Spartans held the Broncos to 26.5% shooting from the field and 17.9% from beyond the 3-point line while posting a whopping 58 rebounds (18 offensive). Senior forward Gabe Brown led the way with 17 points and seven rebounds, making all of his seven free-throw attempts, while another senior F Joey Houser posted a 12-point, 12-rebound double-double.

Sophomore guard A.J. Hoggard, who led the way against Kansas with 17 points, accounted for seven points and seven assists last Friday. The Spartans smashed Western Michigan despite 4-for-19 shooting from deep, while they were 7-for-20 in the opener.

The Butler Bulldogs (3-0; 1-2 ATS) are coming off a 70-59 home win to the Troy Trojans this past Saturday. Playing on the second day of a back-to-back set, the Bulldogs failed to cover a 13-point spread despite a solid performance on both sides of the floor.

Butler shot 53.2% from the field and 48.0% from downtown (12-for-25) while allowing the Trojans to make only four of their 19 attempts from deep. The Bulldogs handed out 18 assists, but they also committed a whopping 21 turnovers.

Sophomore guard Chuck Harris had a big game against Troy, accounting for 23 points on a 9-for-14 shooting from the field. Freshman G Jayden Taylor had ten points, six boards, and four assists, while senior guard Jair Bolden added 21 points off the bench (4-for-5 from deep).

The visitors are listed as small favorites for a reason. They possess more depth than Butler, while the Bulldogs’ frontcourt will struggle to cope with the Spartans’ strength and length. On the other hand, Butler is a senior-laden team, capable of playing tough defense, so we should see a hard-fought battle that will come down to the wire.

I’m backing the Spartans to establish their low-post game and escape with a narrow victory. They’ve covered ten times over their previous 13 outings on the road as favorites of 2.5 or fewer points.

The under is 7-2 in Michigan State’s last nine games overall, and it is 14-6 in the Spartans’ previous 20 outings at any location. On the other side, the under has hit in each of the Bulldogs’ first three outings in 2021-22, so I would ride these betting trends and take the under.

The Bulldogs love to play at a slow pace, averaging only 65.7 possessions per 40 minutes (353rd in the nation). The hosts will try their best to control the clock and slow down things as much as they can.