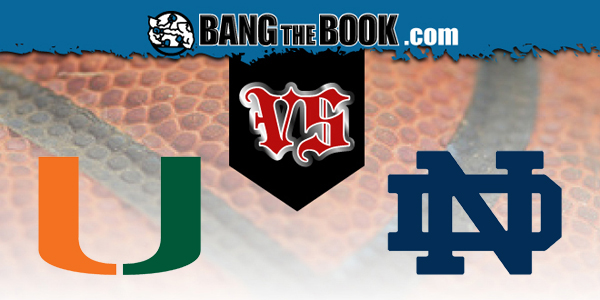 The Miami Hurricanes experienced a bit of a hiccup over this past week as they had to postpone a game against North Carolina at Chapel Hill, but after sitting out a full seven days they are back to take on the Notre Dame Fighting Irish.

This game takes place at 6 PM Eastern time at the Joyce Center in South Bend, and if you’re a BetAnySports customer, you can get a great deal on the odds with reduced juice. And of course, you can always make wagers during the action through Sports Betting Prime.

Miami last saw the floor eight days ago, losing in overtime to Virginia Tech. Considering how many players they actually have available, that was a pretty good result, as was their previous outing, a victory over Duke. And obviously they’re not stepping up in class here.

Isaiah Wong has been critical to this team’s survival, and he has averaged 18.9 points over his last seven games. With the likes of Matt cCross and Earl Timberlake out of action, it’s been a good opportunity for Elijah Olaniyi to get additional playing time.

Olaniyi is a transfer from Stony Brook who was first team all- conference in the American East a year ago. When he transferred to Miami, he was not expecting to play without having to sit out a year. But the NCAA adjusted its rules because of the pandemic, and he was given immediate eligibility. So here he is, and he seems like a natural scorer. Against Duke he had 21 points, then turned around and had 19 against Virginia Tech.

It’s kind of touch-and-go as to whether the Hurricanes will have Chris Lykes available. The diminutive guard, who provides a lot of spark at the point guard position, injured his ankle early in the season and has only played a couple of games. It was hoped that he could come back last week, and he was practicing with the team, but after the North Carolina postponement, he re-injured his ankle in practice, so his status is certainly in doubt.

When you look at the Notre Dame team, they may not have scored a lot of quality wins, but they played some good programs. They’ve been swept by both Virginia and Virginia Tech, also losing to North Carolina, Georgia Tech, Duke, and in the non-conference schedule, Big Ten squads Michigan State, Ohio State and Purdue. But they got a little payback against Duke in the rematch last time out, as a career-high 28 points from Cormac Ryan paced them to a 93 – 89 victory.

Against the Blue Devils they shot 55% from the field, and that’s been a strength, as they are indeed in the top 20 in effective field-goal percentage. Mike Brey’s teams rarely turn the ball over, and this season’s squad is no exception, as they rank 14th in the category of turnover percentage, according to the metrics compiled by Kenpom.com.

Notre Dame often has a sweet shooting team, and they are hitting 39% from the field. And 6 – 10 forward Nate Laszewski has been excellent at stepping out to hit the triple, with 53.3% accuracy. He’s going to be a problem for Miami to deal with.

What Notre Dame doesn’t necessarily do is defend all that well. They don’t exert pressure, so opponents don’t commit many turnovers. And they aren’t exactly Hell on Wheels on the defensive glass. No, their path to victory is to hit a lot of open jump shots from beyond the arc. Miami’s opponents have taken 41% of their shots from downtown, so obviously they permit that. And that is not necessarily the kind of thing you want to do against Notre Dame, which shoots treys and shoots them often, and shoots them well, at 39%.

I’m not sure that kind of combination it’s going to work for Miami, so we are going to go ahead and lay the points.