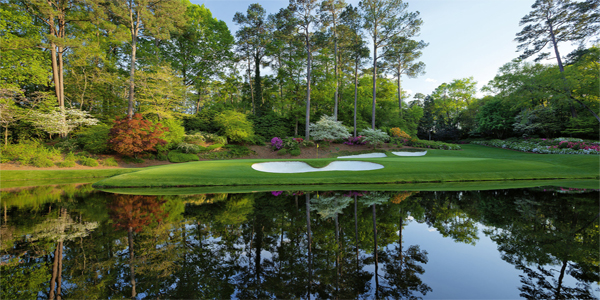 If you have followed The Masters through the years, you’ve heard one expert after another proclaim that “the tournament doesn’t start until the last nine holes on Sunday.”

Well, in that case, let’s skip ahead a little.

The people at BetOnline understand that huge mistakes on the back nine have made the difference between winning and losing through the years. And they also understand that there is no more hazardous hole than the Par 3,155-yard 12th, part of the famous “Amen Corner” and the one they call “Golden Bell.”

And that is why they have constructed a couple of special props for Sunday’s Round 4 action.

Here is one of them:

We know some players who could have taken care of this prop all by themselves – well, almost – in the past. Of course, we’re referring to Rae’s Creek, which runs in front of the 12th green, at an angle to those teeing it up.

Arnold Palmer began his road to ruin there in the 1959 tournament, where he had a five-stroke lead on the final day. He wound up catching the creek on his tee shot and making a triple-bogey 6. That was decisive, as he lost by two shots to Art Wall.

In 1996, Greg Norman had a six-shot lead, but couldn’t avoid putting it in the creek. His double bogey ultimately contributed to one of those come-from-ahead losses for which he has become identified.

In 2016, Jordan Spieth, who looked as if he was on the verge of an astonishing second straight Masters win as a 22-year-old, came to the 12th and hit two balls into the water, which led to a quadruple bogey. He lost what was a three-shot lead on the back nine, and Danny Willett wound up wearing the green jacket that year.

Only two years ago, we saw the perils of erring at the 12th hole on Sunday, and the impact it could have on the golf tournament.

Francesco Molinari had the two-stroke lead, with Tony Finau, Tiger Woods, Brooks Koepka and Ian Poulter right in the thick of things.

At the 12th, Koepka, Finau, Poulter and Molinari ALL hit the ball into the water, leading to double-bogey 5. Woods was able to avoid such a mishap, and that led to Tiger’s historic win.

This hole is the shortest on the course. But it is, in the words of former Masters champion Fred Couples, “One of the most dangerous Par 3s around.”

One of the things that makes it so dangerous is the pin placement; tournament organizers make sure it is in the most difficult place on Sunday, which is on the right side of the green. And that green is extremely narrow, so there is not a lot of depth to work with. Even if you hit it to a “safe” place, which is on the left side (if you get it there), you’re very lucky if you do any better than a two-putt from there.

That’s the kind of thing Palmer was always happy to settle for. “All I ever wanted to do here was make three,” he said, “if I could figure out a way to do it.’

The 12th is, by and large, not the most difficult hole at Augusta National. But it has never played under par in any tournament. The historical average on this hole is 3.28 strokes; the lowest that average has ever been was in 2002, when it was 3.03 strokes.

Where the difficulty tends to get exponentially more severe is when the wind starts playing tricks. It’s a swirling wind that is liable to carry the ball anywhere and land it short (i.e., in the creek), even when that was anything BUT the intention.

It is intimidating enough to have even scared the immortal Bobby Jones, who got his ball wet and wound up with a bogey 5 in the inaugural Masters (then called the Augusta National Invitation) in 1934.

And consider that Jones was the co-designer of the course.

So yes, we would favor the “over” in such a proposition, as knees get weaker on Sunday. Will this happen to the tournament leader on the final day? Well, that’s anybody’s guess. But such a thing occurring is priced at +700 at BetOnline, where you are going to be able to enjoy hundreds and hundreds of wagering options on this year’s Masters tournament – literally anything you can think of. And you’ll also find special Masters Odds Boosters, so that you can get explosive payouts on parlays…… Open your account now, and do it any way you want – that includes all the cryptocurrencies like Bitcoin!