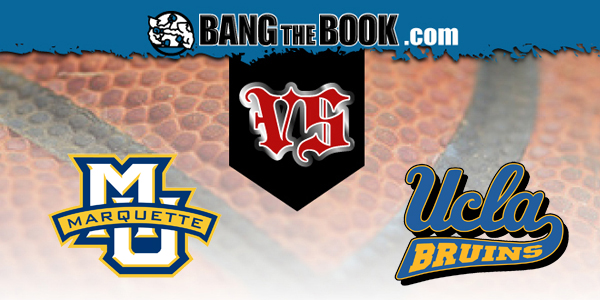 It was a little unsettling to open up the odds screen today and see the NBA at the top of the list. NBA preseason action tips off tonight to go along with a three-pack of games in college football and a much bigger slate of college hoops contests than we saw yesterday.

As always, we’ll highlight a game for you here and that game is the late-night tip between Marquette and UCLA. The Golden Eagles are all the way out in Los Angeles to battle the Bruins in a non-conference game that will be cited down the line when NCAA Tournament seeding is being discussed.

UCLA is -4.5 with a total of 139 for this Big East vs. Pac-12 showdown at BetOnline Sportsbook, where you can get a 100% Deposit Match Bonus and an even higher one if you deposit with Bitcoin.

Let’s break this one down and see if we can get a winner to head into the weekend with a little Uncle Mo.

One of the hardest things to account for in college basketball is what happens when a team loses a star player. Marquette bid adieu to Markus Howard after last season’s abrupt end point. The Golden Eagles are off to a decent start with a big home win over Wisconsin and wins over Pine Bluff, Eastern Illinois, and Green Bay. They did lose by eight to a quality defensive squad in Oklahoma State.

Is that data point enough to be concerned about Marquette here? The Golden Eagles are still trying to figure out their go-to guy with Howard gone. In the Wisconsin win, three players were in double figures, led by freshman Justin Lewis. Lewis responded to that big effort with two points in 18 minutes against Green Bay.

It’s still a work in progress for Steve Wojciechowski’s team to say the least. We’ll have to see if Woj made a conscious choice after the Oklahoma State game or not. After playing 78 possessions against the Cowboys, Marquette has played to 63 and 67 possessions in the last two games. New Green Bay head coach Will Ryan is Bo Ryan’s son, so we expected the Phoenix to slow down a bit, but not to the degree that they have or to the degree that they did last time out.

Marquette has shot the ball well from 3, coming in at 37.8%. They’ve also banged well on the offensive glass and have gotten to the free throw line quite a bit. On the defensive side, opponents are only shooting 38.9% from 2 and 26.5% from 3. The Golden Eagles have really buckled down defensively while trying to figure out the offensive side.

BET COLLEGE BASKETBALL WITH A WELCOME BONUS FROM BETONLINE SPORTSBOOK

UCLA was a bubble team when everything shut down in March. They were going to be a dangerous out in the Pac-12 Tournament. The Bruins lost by 15 to Stanford on January 15 to fall to 8-9 and 1-3 in Pac-12 play. It was the first season under former Cincinnati bench boss Mick Cronin and growing pains were expected with a very, very different style of play.

After that Stanford loss, UCLA went 11-3 and finished the regular season 12-6 in Pac-12 play. A light bulb went on. The players bought in. The only blemishes were road losses to Oregon, Arizona State, and then a two-point loss to USC in what would unknowingly be UCLA’s final game of the season.

After a season opener loss to San Diego State, UCLA is 4-for-4, though the Bruins haven’t played many tough opponents in that span. They have, however, buckled down defensively, including a 20-point win in the conference opener against Cal. Sophomore point guard Tyger Campbell has 6.8 assists against 1.4 turnovers per game and his leadership and ball skills at point guard have made a huge difference for this offense.

UCLA also got back talented sophomore Johnny Juzang for the win over San Diego. He had 10 points on 4-of-6 shooting over 20 minutes of action.

We’ll find out a lot about UCLA over the next few games. They have this non-conference clash with Marquette and then play Kentucky before facing Oregon in Eugene.

Sample sizes can play tricks on your mind at this time of year. Teams are padding stats against bad teams. Marquette’s allowed 46.4% from 2 over the last three games. Their defensive numbers are regressing and it will be a challenge for the offense to be efficient enough here against UCLA. This is also a long trek for the Eagles, who haven’t left Marquette yet.