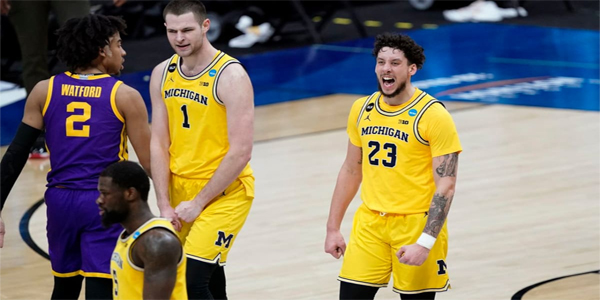 When the Michigan Wolverines lost forward Isaiah Livers to an injury and proceeded to lose three out of five games, some people predicted a relatively early exit for them in the NCAA tournament, despite the fact that they had the top seed in the East Regional. But not only have they been able to overcome that, they came up with perhaps one of their two or three best performances of the season on Sunday against Florida State.

Now Michigan is a step away from the Final Four, but they must take on the UCLA Bruins, who have beaten back all challenges thus far in what has been an unexpected run, to say the least.

This Elite Eight game will begin at 9:57 p.m. Eastern time at Lucas Oil Stadium in Indianapolis. And if you are a BetAnySports customer, you can watch it on TBS and place wagers in real time, using what is available through Sports Betting Prime.

UCLA, which found itself playing an extra game because they were part of the “First Four,” scored a big win over Alabama on Sunday. They had six players in double figures and tallied 23 points in the extra session as they beat the Crimson Tide 88 – 78.

What we’ve seen is that UCLA is more than solid from downtown; they’ve made 37.2% for the year. And they have no problems being patient, holding a ball an average of 19 seconds on the shot clock. They’ll get the opportunity to work the ball around the half-court, because Michigan, by nature, is not a team that forces a lot of turnovers, and UCLA point guard Tyger Campbell has had better than a 3- to- 1 ratio of assists to turnovers in his last seven games.

The contributions have been very balanced. Johnny Juzang, the Kentucky transfer, has averaged 20 points per game in the tournament. Everyone else in the lineup has had at least one big game, and that includes Jaime Jaquez, who posted27 points against Michigan State and then 17 points with eight rebounds against Alabama.

Meanwhile, Michigan showed early dominance two nights ago against Florida State, getting out to an eleven-point halftime lead and cruising to a 76 – 58 victory. They held the Seminoles to just five triples, five points on free throws, and a 37-31 edge in rebounds.

What might be most interesting about that is that the Maize and Blue needed only three triples to win a game by 18 points against an extremely formidable foe. We realize that Isaiah Livers is not easy to replace, because he was a 43% shooter from beyond the three-point line and had the highest offensive rating on the roster. But yet, they are doing it.

Last time out, coach Juwon Howard started 6 – 8, 240 -pound Brandon Johns, who contributed 14 points. and you just know that with him, 6 – 9 Franz Wagner and 7 – 1 Hunter Dickinson up front, they have the potential to outmuscle a lot of teams.

UCLA might just be one of those teams. Remember that they are playing without 6 – 9 Chris Smith and 6 – 10 Jalen Hill, both key contributors to the rotation, and this might be the time they’d really come in handy. Without them, the only big man available is 6 – 9 Cody Riley. And they’re coming off a draining game we’re a couple of starters – Jaquez and Jules Bernard – played more than 40 minutes, The depth and stamina of the squad will be severely tested. We can see Michigan’s size wearing them down.

And on top of that, the Wolverines still have the potential to hit plenty from the outside; remember, they are 38.3% accurate as a team from downtown.

Knowing that UCLA does not necessarily put a huge emphasis on triples, they are most likely going to have a lot of “traffic” problems navigating Michigan’s defense, which allows only 42.6% from two- point range. And if this thing comes down to Michigan having to protect a lead late, keep in mind that they shoot 77.4% from the free-throw line, so they are not leaving a lot of points on the table.

It’s been a great run for UCLA, but they may just run out of steam on Tuesday night. So we are going to lay the points.

Remember that at BetAnySports, you can get reduced juice on this game, not to mention a whole bunch of props to bet on, and then after it tips off, Sports Betting Prime enables real-time wagering….. You have lots of payment options to open up an account, and then includes Bitcoin, which is fast and easy with their automated system and NEVER incurs a transaction fee!