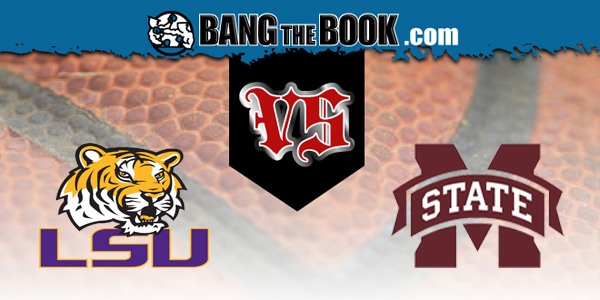 Wednesday is a new day, thankfully, after St. John’s badly bungled late-game situations against Butler and eventually gave backers a bad luck beat in overtime. The college basketball grind is not for the feint of heart to say the least and last night’s reminder felt all too familiar for a lot of people out there. Closing line value. Good bet. Bad result. Lather. Rinse. Repeat.

So, we move on from Tuesday’s heartache into the Wednesday college hoops card in hopes of finding a spotlight game with some good angles. For that, we head to the SEC, where LSU is taking on Mississippi State. The Bulldogs are -1.5 with a total of 145.5 at Bovada Sportsbook. Early money has been on the LSU side.

We’ll take a look at this one from all sides and make a play on this ESPNU broadcast with a 9 p.m. ET tip.

It turns out that not really playing defense is a bad thing. LSU has fallen from grace pretty quickly of late with four losses in the last five games. The Tigers beat Texas A&M, one of the worst teams in the conference, on January 26. It is the program’s only win since January 16. Losses to Alabama, Kentucky, a slumping Texas Tech squad, and Alabama again have put LSU on its heels in conference action.

LSU is a team that got propped up a bit too much early on. The non-conference slate was weak and Will Wade’s team lost to Saint Louis, the best opponent on the schedule prior to SEC play. In conference action, LSU is 6-4 and the team’s best win is over Arkansas at home when the Razorbacks were sputtering as LSU is now.

All the offense in the world hasn’t been able to bail out the defense. LSU ranks 11th in adjusted offensive efficiency per Bart Torvik, but 136th in adjusted defensive efficiency. Teams are getting the shots they want inside the arc and have made a lot of those two-point attempts, as LSU ranks 252nd in the nation in 2P% defense. Opponents are only shooting 30.1% on threes for the season and conference opponents have only made 31.4%, otherwise LSU would be even worse off defensively.

Unfortunately for LSU in this one tonight, Mississippi State ranks 340th in the nation in 3P Rate at 26.7%, so Wade’s team will have to find a way to defend the paint to emerge victorious this evening.

One big bright spot for LSU is that they do take care of the basketball at the best rate in SEC play with a TO% of just 17.1%. They have not had a game above that mark since the win over Arkansas on January 13. The problem is that they’ve also gone cold in the shooting department, particularly from deep. In the win over Texas A&M, LSU was 10-of-29 from 3. In the four losses, LSU has combined to go 22-of-89.

Ben Howland’s Bulldogs have been on the wrong side of some tough losses this season. They have two losses in double overtime, a loss by one to Texas A&M, and a loss by three with a whale of an effort against Tennessee back on January 26. They’ve had a couple close wins, but nothing like what we’ve seen on the losing end.

Will this be another one of those close games? Mississippi State plays at a much slower pace than most of the rest of the conference, so their style inherently features a lot of close matchups. They shoot threes well at 36.9%, but don’t shoot a lot of them. They are a horrific team at the free throw line that comes in ranked 323rd in the nation at 64.2%. Opponents are shooting 75.2%, which is 320th in the country. So, they’ve been outscored badly at the free throw line, which is problematic in close games with limited possessions.

Furthermore, Mississippi State has a turnover on over 21% of its possessions. The Bulldogs get some of those back by being a terrific offensive rebounding team, but it is still a tough way to make a living. The Bulldogs are a stout defensive squad that ranks 43rd in eFG% defense at 46.4%. Opponents are only shooting 45.1% on two-point shots and Mississippi State is 19th in Block%.

Despite high TO% marks in the last three games, Mississippi State has held the opposition to .865, .823, and .800 points per possession against Tennessee, Arkansas, and South Carolina. Extra reps on the defensive end have been forced by TO% marks of 27.8%, 35.1%, and 28.5%. Opponents have gone 10-of-61 from three-point range in those games.

LSU looks to be the side here. Mississippi State was 10-of-19 from deep against South Carolina after making just 22 three-pointers over the previous six games and 29 over the previous eight games. This is a team that doesn’t take care of the basketball and puts a lot on the defense. LSU has had some offensive woes recently and seems to match up poorly with Alabama, but the Tigers’ porous defense shouldn’t be exposed as much here by Mississippi State.

The line has seen some early LSU money and the Tigers are likely to have some extra possessions in this game and should also perform better at the free throw line.