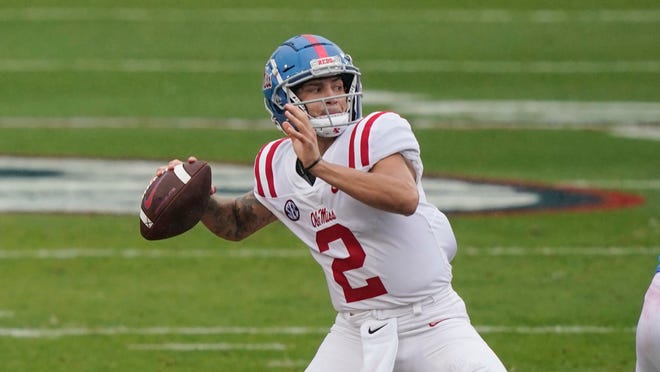 These two schools meet for the first time ever, and the kick-off is set for Monday, September 6, at 8:00 PM ET. The Rebels are 8.5-point favorites on MyBookie Sportsbook, while the totals sit at 75.5 points.

The Cardinals are hoping for a bounce-back campaign

The Louisville Cardinals went 8-5 in 2019 and won Music City Bowl in the first year under Scott Satterfield, while Malik Cunningham had a nice sophomore season under center, tossing for 2061 yards, 22 touchdowns, and five interceptions in 12 appearances. Satterfield’s second year was a painful one, as the Cardinals suffered seven losses in 11 outings, while Cunningham got picked 12 times.

Louisville leaned on its ground game last season, racking up 200 rushing yards per game and 5.2 per carry. Malik Cunningham had 131 totes for 609 yards and seven touchdowns, but the Cardinals won’t return RB Javian Hawkins, who had 133 carries for 822 yards and seven scores in 2020.

Last year, Louisville was tallying 29.5 points per game (58th in the country) while surrendering 26.6 in a return (49th). The Cardinals had a few strong defensive outings, but most of the time, they’ve struggled against rushing, allowing 179.9 yards on the ground per contest (80th).

The Rebels need more from their defense

In his first year at the helm, Lane Kiffin led the Ole Miss Rebels to a 5-5 record and a 26-20 victory over Indiana in the Outback Bowl this past January. His offense was unstoppable, led by sophomore QB Matt Corral, but the Rebels’ defense has been terrible for most of the 2020 season, yielding a whopping 40.3 points per game (122nd in the nation).

Mississippi was dead last in total yards allowed per contest (535.7). The Rebels’ secondary was the worst in the country, too, surrendering 324.4 yards per game.

The Rebels return four starters among their offensive line, so I’m expecting their offense to explode in Week 1. Wideouts Jonathan Mingo and Dontario Drummond are coming back, too, and they combined for 52 receptions and ten touchdowns last year.

Ole Miss possesses enough offensive weapons to torture Louisville’s defense, but the Rebels’ D is questionable. Hereof, I don’t feel comfortable with an 8.5-point spread. The hosts should win, but their defense might be bad enough to keep the Cardinals close for all 60 minutes.

This should be a proper high-scoring affair, so my best Cardinals vs. Rebels betting pick is the over on the totals despite a gigantic 75.5-point line. Both teams should move the ball easily, especially the Rebels who’ll be ready to pick up where they left off on the offensive side of things.

Furthermore, the over is 12-4 in the Cardinals’ last 16 games overall, and it is 5-1 in the Rebels’ previous six contests played in September.