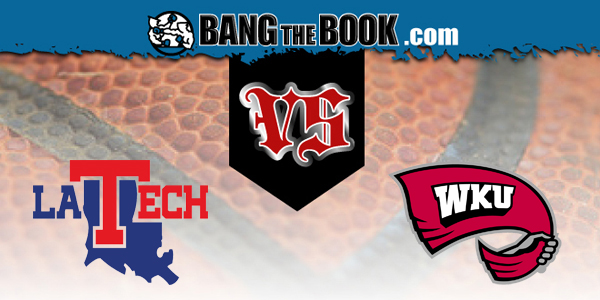 It doesn’t often happen that two teams who have met not once, but twice during the regular season would find themselves facing each other again in a post-season tournament. But that’s exactly what will be the case on Thursday night, as the Western Kentucky Hilltoppers and Louisiana Tech Bulldogs square off in the quarterfinal round of the National Invitation Tournament (NIT).

The winner of this game will advance to the final four of the tourney, which is being played in its entirety in the Dallas-Fort Worth area.

Game time is 10 PM ET at the Comerica Center in Frisco, TX, and while ESPN2 is televising it, BetAnySports offers the opportunity to place wagers in real-time while the action is in progress, utilizing the resources of Sports Betting Prime.

As members of Conference USA, these two have met twice during the regular conference season. And they came in back-to-back nights. On January 8 WKU prevailed 66-64 as Charles Bassey poured in 24 points with 17 rebounds and blocked four shots. The next night Louisiana Tech got some payback, holding the Hilltoppers to 35% shooting in a 63-58 victory.

So you can see a pattern – 130 points in the first meeting, 131 in the next. And both of those figures fall below what we are seeing here. Maybe that’s a way to go, but let’s continue to explore.

LaTech got by an Ole Miss team that was down two starters in the opener, winning 70-61. They were down ten points at the half, then came roaring out of the locker room in the second half. Kenneth Lofton, a freshman who supplies a lot of muscle on the inside, scored 22 points.

But he was less of a factor in the two meetings, scoring just four points with six rebounds.

The Bulldogs are not a great three-point shooting team, which means they may have to work the inside. And not only is WKU especially strong at defending inside the arc, they aren’t going to be surrendering many second chances either, as they are in the top 40 in Defensive Rebounding Percentage.

Part of this, of course, involves Bassey, who is one of the best big men in the country. He is, individually, 5th in the nation in Defensive Rebounding Percentage and 11th in Blocked Shot Percentage. He’s imposing, athletic and probably a first-round pick in the upcoming NBA Draft.

He’s not bad from the line either. In fact, the ‘Toppers as a team have hit 79% of their tries from the charity stripe.

And they got a big effort from Taveion Hollingsworth, who scored 21 points in a 69-67 win over Saint Mary’s in their NIT opener. Western Kentucky committed just four turnovers in that game.

Make no mistake about it, though; Louisiana Tech is a good defensive team (27th nationally in Adjusted Defensive Efficiency). They have yielded less than 30% from three-point range, and they can hold their own on the defensive boards. So it won’t be any picnic for WKU.

Nonetheless, we’ve got to give the edge to the Hilltoppers, since we’re not sure we envision Lofton standing out at both ends of the floor. And Bassey is going to be too much in the end.

During March Madness, you’re going to be right on top of the action with BetAnySports, where you have reduced juice for better odds, in addition to Sports Betting Prime for real-time wagers………. Open an account very easily, with debit cards, credit cards, person-to-person transfers or the virtual currency of Bitcoin, where there is no transaction fee!