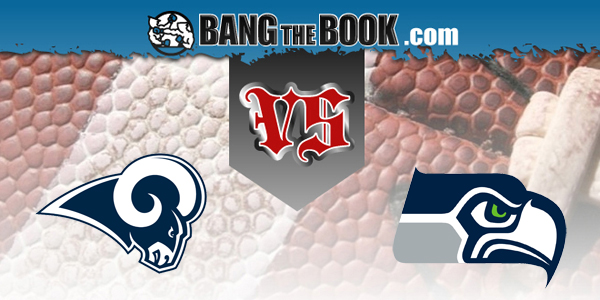 John Wolford will be the answer to a bar trivia question one day. The Wake Forest product led Los Angeles to a Week 17 win over the Arizona Cardinals to secure a playoff berth for the Rams. Come to think of it, maybe Chris Streveler will be a trivia answer one day, too.

The prize for the Rams is a third meeting of the season with the Seattle Seahawks. The Seahawks are -3.5 with a total of 42.5 at MyBookie Sportsbook for the Wild Card Weekend game on Saturday January 9.

What really stands out about this line is that it is the same price we saw in Week 16 when the Rams lost 20-9 to Seattle. That was with Jared Goff, whose status seems to be more doubtful than questionable following thumb surgery.

We’ll take a look through this one and see if the money that has come in on the Rams is the right side or not.

This line opened -4.5, which felt like a compromise from the oddsmakers. There aren’t a lot of Jared Goff supporters in the betting markets and his performance in the game against the Seahawks added more fuel to that fire. So, with Goff likely out, the line opened 4.5. It probably would have been -6 if Goff was officially ruled out.

Now, though, whether the practice reports have been positive about Goff or bettors are actually excited about John Wolford, the early-week money has been on the Rams and this line is even threatening to go down to +3 with some extra vig on the underdog side. It was not a good look when the Rams were +3.5 at Seattle on December 27, but the movement on this game is a good lesson for novice bettors not to overreact to one data point.

The returns on Wolford’s first start were pretty positive. He was 22-of-38 for 231 yards. He threw a pick and took a couple of sacks, but there weren’t any glaring mistakes and he was able to run around a little bit for 56 yards on six rushing attempts. The Rams will have Cooper Kupp back from the COVID-19 list this week, so he’ll get the team’s best skill possession weapon back in the huddle.

Maybe bettors are just enamored with this Rams defense. It’s hard not to be. The Rams defense allowed just 4.6 yards per play and was a top-five defense in DVOA against both the run and the pass. Speaking of DVOA, the Rams had a top-five rushing offense that helped to cover up some of the concerns in the passing game.

The thing about Seattle is that you really need to look at their defense as tale of two versions. This is a Seattle defense that was sort of a trainwreck early in the season. They allowed 30 or more points four times by mid-November and had not held a single opponent under 23 points. Jamal Adams returned from injury in Week 9 and the Seahawks acquired Carlos Dunlap from the Bengals that same week. Everything changed after that.

Ironically, the first Rams game was a turning point. The Seahawks lost that game 23-16, but it started a run in which Seattle did not allow more than 23 points the rest of the way. That Rams game kicked off a string of seven straight unders for Seattle. It couldn’t have happened at a better time for Seattle because Russell Wilson proved to be human.

Wilson had a 12/5 TD/INT ratio over the final eight games for the Seahawks in the regular season. In the first eight games, Wilson had a 28/8 TD/INT ratio. Seattle wound up relying on the run a little more, much to the dismay of those that already dislike offensive coordinator Brian Schottenheimer. Wilson went from 9.23 adjusted net yards per pass attempt to 6.46 ANY/A in the second half of the season.

Big plays went away. The Seahawks hung 40 on the Jets, but that was the only game in which they exceeded 400 yards. Maybe the Rams money has nothing to do with Wolford/Goff. Maybe it simply has to do with the disappearing act of the Seahawks offense.

Since Sean McVay took over for the Rams in 2017, he is 3-5 ATS against the Seahawks, but he is 5-3 straight up. Four games have gone under and four games have gone over. Some games have been competitive. Some haven’t. There really isn’t much to glean from the head-to-head meetings in my opinion.

The Rams defense has probably been undervalued and underappreciated as the season has gone along. I’ve even said that I feel like the Rams are the second-best NFC team at points, though Goff’s play down the stretch has certainly caused me to reevaluate that position.

Wolford’s mobility is an interesting wrinkle to this game, since Goff doesn’t move well. Wolford might also be a smarter quarterback. I think some people are actually viewing him as an upgrade and that is the driving force behind the line move.

As for me, my favorite play here is a derivative and that is Seattle for the first quarter. They’re -1/2 at plus money at MyBookie. The Rams were actually outscored in the first half for the season. Add in a seasoned QB in Wilson vs. likely Wolford, or worse, an injured Goff, and I think Seattle starts faster here.

As far as a full-game lean, the under makes sense.