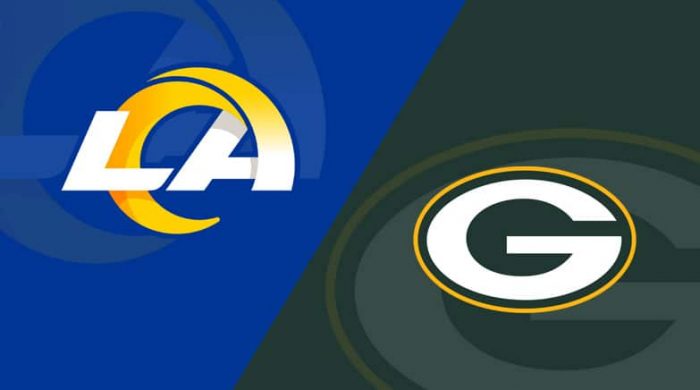 Week 12 of the 2021 NFL season brings the highly-anticipated NFC matchup between Los Angeles and Green Bay at Lambeau Field, so we’ve prepared the best Rams vs. Packers betting pick along with the latest team stats, news, and odds update.

The Packers opened as small +1.5 home underdogs on BetOnline Sportsbook. The Rams are -125 moneyline favorites with a total of 47.0 points, as Los Angeles hopes to put an end to Green Bay’s dominance. The Packers are 6-1 SU and 7-0 ATS in their last seven meetings with the Rams.

The Rams got beaten hard by the Niners. LA’s front seven looked helpless, allowing 156 rushing yards on 44 attempts, while George Kittle and Deebo Samuel tortured the Rams’ secondary. On the other side of the ball, the Rams ran only ten times for 52 yards, while Matthew Stafford went 26-of-41 for 243 yards, a TD, and a couple of interceptions.

Stafford has already tossed for 3,014 yards and 24 touchdowns this season, but over the last two games, he’s recorded a couple of TD passes and four interceptions. Matthew has made some odd decisions, especially in that home loss to Tennessee, while the Rams average only 97.9 rushing yards per game (24th in the NFL).

The Packers lost two of their last three

The Green Bay Packers fell to 8-3 SU and 9-2 ATS on the season following a 34-31 defeat at the Minnesota Vikings last Sunday. It was their second defeat in the last three weeks, and Green Bay failed to cover for the first time since Week 1.

The Packers outgained the Vikings 467-408 but lost on a game-ending field goal. Aaron Rodgers led the way for Green Bay with 385 yards and four touchdowns, while Marquez Valdes-Scantling had four catches for 123 yards and a TD. The Packers struggled on the defensive side of the ball all game long and didn’t really deserve a win, allowing the Vikings to record 25 1st downs and go 9-for-13 on a 3rd down.

The Packers’ D has been terrific for most of the season, yielding 19.5 points per game (5th in the NFL) on 105.6 rushing yards (12th) and 213.2 passing yards (7th). Green Bay is scoring 22.5 points in a return (17th), and Aaron Rodgers has thrown for 11 touchdowns and only one interception over his last five appearances. Rodgers is struggling with a broken toe in his foot but won’t miss any time.

This is the clash of the two legitimate Super Bowl contenders and it could easily go either way. The Rams had enough time to analyze their losses and should be ready to deal with one of the toughest teams to beat in the NFL, while the Packers will look to overcome their injury problems and bounce back from a tough loss at Minnesota.

Green Bay is a home dog for the first time since 2018 when the Packers covered a 1.5-point spread in a 29-29 tie against the Vikings. I cannot bet against Aaron Rodgers, though the Rams’ defense should be fired up to prove its worth after an embarrassing performance against the 49ers. If you’re looking for a teaser, this is the clash for you, as neither team should win it easily.

The Rams’ offense has been pretty one-dimensional all season long. On the other side, the Packers are vulnerable on the ground, but I’m not sure if the Rams have the right plan for this game. Sean McVay is sometimes stubborn, while the Packers’ passing defense has been outstanding before last week’s meltdown against the prolific Vikings air attack.

While Green Bay’s defense is one of the most pleasant surprises of the season, the Rams’ D is certainly a huge disappointment. If they want to beat the Packers on the road, the Rams will have to show all their defensive talent.