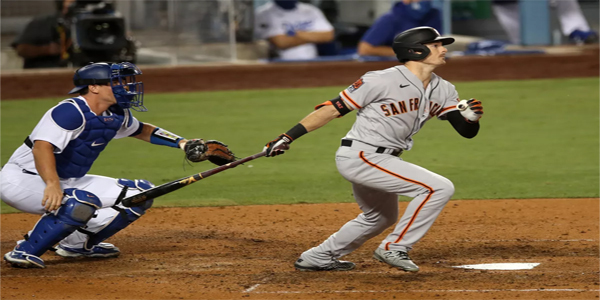 Let us start with a look at some player and team situational trends that support the Machine Learning gradings for the ‘OVER’ bet. LA Dodgers will start veteran and future Hall-of-Famer Clayton Kershaw and he has posted a team record of 17-5 ‘over’ when starting against a team with a losing record in starts spanning the last three seasons. The Giants are on a 7-0 ‘OVER’ run in home games and facing a team with an excellent bullpen sporting a 1.35 WHIP on the season. The Giants are also a solid 24-10 ‘OVER’ in home games and facing elite teams that are outscoring their opponents by an average of 0.5 runs-per-game in games played over the last two seasons.

What do the Current Betting Lines Tell Us?

Looking at the betting lines I can tell you the Dodgers are 18-6 ‘OVER’ as a road favorite of -175 or greater in games played over the last two seasons. Kershaw’s team record is 17-6 ‘OVER’ after a start where he allowed one or no earned runs in starts spanning his last three seasons.

This is the second game of a four-game series between these NL West Divisional favorites. Last night the Giants won 10-8 over the Dodgers in a barnburner type of game, which ended the Dodgers four-game win streak and extended the Giants current win streak to seven straight. The Dodgers have won 11 of their last 13 games since August 12 and scored at least 7 runs in 7 of these games. Over these 13 games, the Dodgers have averaged 6.85 RPG and allowed a skinny 3.69 RPG and results in a dominating 3.16 RPG differential. Since August 12th, the Giants offense has risen from the phoenix averaging 6.25 RPG, but have allowed 5.25 RPG, which opens the door for the Dodgers to have another huge offensive night.

Despite the loss the Dodgers with Kershaw on the hill are lined as -250 favorites at DraftKings and thew MGM has the lowest currently with Dodgers as -238 road chalk. Bet America has the best ‘OVER’ line currently with a price of 8 runs and -108 vig. Fox Bet is sitting at 8.5 runs and +105 vig as there has been a steady increase in public small-sized bets on the ‘UNDER’.

During this Dodger winning streak, Cody Bellinger, has shrugged off a horrible start to the season, sporting 10-for-23 hitting including 4 home runs, two doubles, and has increased his OPS a significant 195 basis points. So, the Dodgers have the potential to score 8 or more runs in any game no matter, who the opponent has on the mound.

How is Clayton Kershaw Pitching?

I cannot imagine there is even a single person that would not agree that Kershaw is a sure-thing first ballot Hall-of-Fame elected player. In recent seasons he has had to reinvent himself as his fastball just was not having the speed or heavy sinking movement it had when he was younger. He has thrown far less fastballs and has been able to throw more sliders with different break points keeping batters off balance even if he throws the slider 5 times in a row.

For his career he has thrown fastball an average of 55%, but in 2020 his fastball accounts for just 40% of the pitches thrown. His slider accounts for 43% and his slow-motion looping curve that sometimes travels at 65 MPH is used 17% of the time. So, batters cannot sit fastball on the first pitch because they just do not know what pitch will be thrown. More batters are taking his first pitch and if it is a first pitch strike the batter’s batting average drops 80 basis points. Talk about batting in a hole.

Have Any Current Giants Had Success Against Kershaw?

The overall point is that Kershaw is not always dominating in recent years. Three current Giants have had strong success against Kershaw. Donovan Solano is batting 0.316 with 2 walk and 4 Ks in 16 at-bats, Wilmer Flores is batting 0.294 with a home run, a walk, and 4 Ks, and Evan Longoria is batting 0.292 in 24 at-bats.

How Has Giants Starter Gausman Done vs the Dodgers Lineup?

Kevin Gausman will start for the Giants and I do expect him to get hit hard and often against the Dodgers lineup. Mookie Betts is batting 0.375 with 3 home runs, 7 RBI, in 40 at-bats. Overall, the current members of the Dodgers have batted 0.268 with five home runs and 15 RBI in a slightly small sample size of 100 at-bats.

Gausman is a solid starting pitcher, but in 2020 he has had trouble finishing off batters with outs after being ahead in the count. He has thrown 501 pitches to 133 batters for an average of 3.76 pitches per batter, which is a solid ratio, but many of these at-bats are ending with his hits. Opponents are batting 0.274 with a 0.303 on-base-percentage that reflects that his pitches are getting far too much of the plate and strike zone that enable batters to barrel up these pitches. The Dodgers are excellent at working counts and you can bet they are going to be sitting and looking for spots in the strike zone to hammer into the gaps.

Summary of the Machine Learning Tools and Projections

SIGN UP AT BETDSI AND GET A 100% DEPOSIT BONUS!