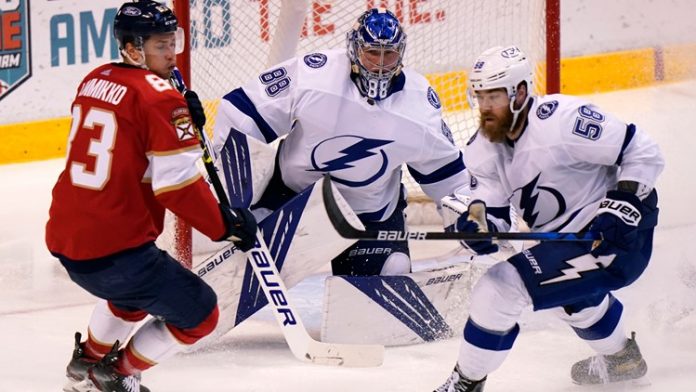 The 2021 NHL Playoffs started with a good helping of drama. It took exactly one game to get our first playoff overtime. The Washington Capitals beat the Boston Bruins 3-2. Hopefully the high stakes and the high intensity from that game are a sign of things to come in the other first-round playoff series as well.

Three more playoff series get underway on Sunday, including Game 1 of the Sunshine State Rivalry between the Tampa Bay Lightning and the Florida Panthers. The Bolts are on the road, but are still a small favorite for Sunday’s matchup with a total of 5.5 at Bookmaker Sportsbook.

NBC Sports Network will carry the coverage of this one and we’ll carry some coverage with a betting preview for the game.

Teams never want to be playing poorly going into the playoffs, but you do have to wonder how much it will affect the Lightning. Tampa Bay dropped three straight to end the regular season, including consecutive losses to the Panthers by a combined score of 9-1. Those four points and two wins are the reasons why Tampa Bay will begin on the road here.

The Bolts had won six of seven prior to the three-game losing streak, so we’ll have to see if they can flip the switch and get back on track now that the stakes have been raised with the start of the playoffs. Florida won five of eight meetings during the regular season and two of the losses were in overtime, so the Panthers clearly had the upper hand in the season series.

Despite that, Tampa Bay is still the road favorite here and the favorite to advance in the playoffs. A big reason why is Andrei Vasilevskiy. Vasilevskiy actually played both games against Florida to end the regular season and struggled, but still wound up with a 31-10-1 record, a 2.21 GAA, and a .925 SV%.

Tampa Bay actually had some tough times later in the season at 5-v-5. There were some injury concerns, but the Bolts finished just +14 in goal differential at 5-v-5. They’ll have to change that in the playoffs, but the task at hand could be easier with the returns of Steven Stamkos and Nikita Kucherov at just the right times.

The Panthers do have questions in net, which has a lot to do with where this line is currently sitting. As the season wore on, there was a little bit of controversy in net. If the Sunrise/Fort Lauderdale/Miami market was a bit bigger for hokey, it probably would have dominated the headlines.

Sergei Bobrovsky should get the first opportunity in net, but that may have more to do with the massive contract than his actual play. Bobrovsky finished up the regular season at 19-8-2, but with a GAA approaching 3.00 and a SV% of just .906. Chris Driedger was 14-6-3 with a 2.07 GAA and a .927 SV%. One would have to think that the Panthers would be quick to make a change if Bob struggles. And that could very well be the case.

Florida was +24 in 5-v-5 goal differential for the regular season and even did well late in the year without the services of Aaron Ekblad, who was having a huge season but suffered a devastating leg injury. The Panthers are not just a one-trick pony with a potent offense and a lot of scoring threats. They also allowed the third-fewest scoring chances in the league 5-v-5.

Six straight wins to round out the regular season were good enough to put Florida just one point behind Carolina in the Central Division standings. Contrary to Tampa Bay, Florida is playing well going into the playoffs, but both teams will wipe the slate clean and see what happens in Game 1.

The Lightning and Panthers were neck-and-neck throughout the regular season, but Florida managed to amass 12 points in the eight head-to-head meetings. The Panthers may simply match up pretty well with the Lightning. However, the edge in net is clear. Tampa Bay is getting back two players with top-end potential in Stamkos and Kucherov. That looks like too much to overlook here.

Who Has The Best Chance to Win the World Series?